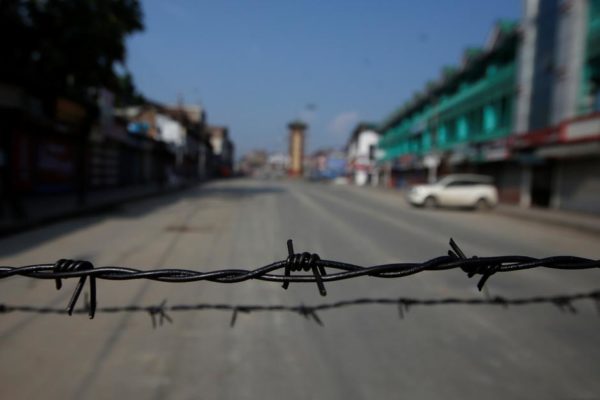 A Reuters file photo of the locked down Srinagar.

In a special statement, the prime minister strongly condemned and rejected the “Jammu and Kashmir Re-organization Order 2020”, terming it against the fundamental rights of Kashmiris and in sheer violations of UNSC resolutions on Kashmir.

“India after abrogating the special status of the disputed territory, in her second step wants to deprive Kashmir of its Muslim identity by converting the majority of Muslims into a minority”, PM Haider added.

He stated that the Modi regime has nothing to do with humanity and that New Delhi was taking advantage of the international community’s focus on the ongoing COVID-19 pandemic as it advanced with its sinister Hindutva agenda.

“International community must come-forward and take serious notice of the Indian move aimed to change the demographic composition of the occupied valley”, he appealed.

The AJK prime minister also said that Indian action was a continuation of India’s illegal and unilateral steps since August 5, 2019 and a clear violation of international law including the 4th Geneva Convention.

“New domicile laws in Kashmir would grant same rights to ex-Indian army officials, civil officers, their kids and other students who had studied in Kashmir as the permanent residents of the state. The recent Indian move would not only deprive the native Kashmiris of their jobs but also of their land and other natural resources”, Haider feared.

PM Haider cautioned that such motives clearly indicate that the Indian government was going to settle its citizen in IOK by providing them jobs. “It will be disastrous as Kashmiris would lose their identity too.”

He said the Modi doctrine was continuously targeting Kashmiris and committing brutalities but it must know that despite all its atrocities, it couldn’t deprive of Kashmiris their fundamental right, right to self-determination, which has been promised to them by the UNSC.

“Kashmiris will never accept such blatant usurpation of their fundamental rights and attempts to change their demography and a distinct identity,” he said.

It is pertinent to note that on August 5, 2019, India had revoked Articles 370 and 35A, depriving Kashmir of its special semi-autonomous status. With the articles revoked, the Indian occupied Kashmir was deprived of its own constitution and was bound to abide by the Indian laws and the Constitution of India.