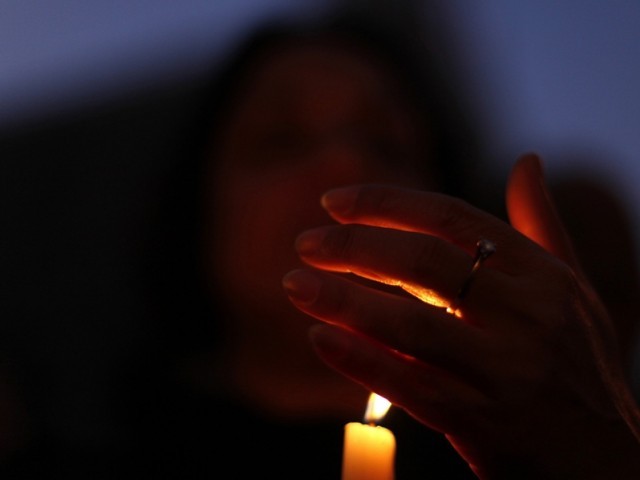 Several families of the victims of the tragic Airblue plane crash gathered near Fawara Chowk, carrying candles and pictures of their loved ones they lost a year ago in an event that will remain alive in infamy.

Out of the 152 passengers, more than a hundred passengers were from Karachi, whose families united under a national “affectees group” to pressurise the case for a conclusion. Many refuse to accept the monetary compensation allocated to them by the company. They say want to reach its conclusion in a transparent manner.

The last 365 days of several such families were spent documenting and monitoring each and every effort, move, announcement and action regarding the case.

The relatives say that they have been unable to wipe off tears. Haris Lodhi – whose mother was one of the deceased passengers – is the media manager of the Airblue Crash Victim’s Affectee Group and has documented each news item, aired program, email sent to every department, condolence messages, and procedural details since day one regarding the crash.

Lodhi, who was present at the Karachi Press Club, told The Express Tribune that his 35-year-old dumb and deaf brother has been left all alone after the death of their mother. His family is one of those who have not yet accepted their compensation money.  “If we take the money, they are going to toss off the case. But we want transparency and not money.”

The Sindh High Court (SHC) has issued notices to Airblue, Civil Aviation Authority and other relevant authorities for September 15 after a petition was filed in the court by the widow of a victim. Dr Mirko’s wife Dr Marao filed a compensation claim in the SHC for Rs77.6 million. (with additional reporting by AHMED JUNG)