Virus restrictions to remain till 14th

Virus restrictions to remain till 14th 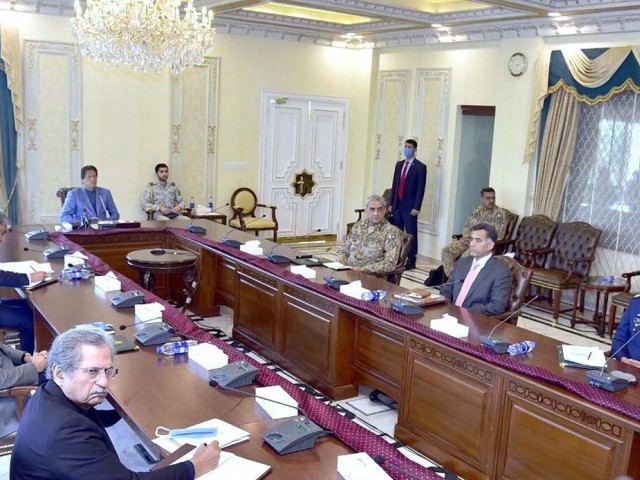 ISLAMABAD: The National Coordination Committee (NCC) on Covid-19 on Wednesday decided to extend the restrictions imposed to stem the viral outbreak in the country for two more weeks – from April 1 to April 14 — as the nationwide tally of coronavirus infections surged past 2,100 with 29 deaths.

Separately, army chief Gen Qamar Javed Bajwa said the armed forces would stand “shoulder to shoulder with the nation to guard the border between the people and Covid-19”.

Briefing reporters about the NCC meeting, Planning and Development Minister Asad Umar said the federation, the four provinces, Gilgit-Baltistan (G-B) and Azad Jammu and Kashmir (AJK) had uniformly decided that the existing restrictions would remain in place until April 14, unless decided otherwise.

“The restrictions have played an effective role and a decrease has been seen in the number of cases. If they were not imposed, we might have seen a lot more cases,” he added. “We don’t feel that there’s a need for more restrictions as the current measures are working.”

Prime Minister Imran Khan chaired the sixth meeting of the NCC, which reviewed progress in controlling the spread of the disease and discussed strategies to minimise its impact.

Umar, who is the focal person for the national effort against Covid-19, said earlier the federating units had their own restrictions in place and different dates were announced but after the NCC meeting on Wednesday, all the provinces, G-B and AJK were on the same page on extending the restrictions for two weeks.

He said keeping industries related to food, medicine and power operational was crucial because the restrictions would bear fruit only if basic necessities were continuously provided to the people.

The minister said it had been decided that there would be no restrictions on the transportation of goods.

“All units have assured that they would implement the [NCC’s] decision to allow the movement of goods transport,” he added, hinting that the disagreement between the Centre and Sindh government over the issue had been sorted out.

“You might have seen that our coordination is getting better with the passage of time.”

Sharing another decision made during the NCC meeting, Umar said the chief secretaries of all units would participate through video conferring in regular early morning meetings of the National Command Centre to enhance the operational coordination.

The NCC, he added, had also decided that stranded overseas Pakistanis would be brought back to Islamabad in a controlled manner through a special PIA flight on April 4.

“The passengers will be tested and kept in quarantine at the airport until their reports are received. If they test negative, they will be asked to self-isolate themselves and take necessary precautionary measures. Those who test positive for the disease will be sent to hospitals.”

On April 5, the committee concerned will review measures for bringing back Pakistanis stuck abroad and if the experiment is successful, flights will resume at different airports of the country.

“As public transport is not available these days, special arrangements will be made to drop passengers at their destinations,” the minister said. “Domestic flights will remain suspended until further notice.”

Special Assistant to the PM on National Security Moeed Yusuf, who was present alongside Umar, said the government had decided to allow special flights to operate from April 3 to April 11 to bring back Pakistanis stranded abroad.

He added that 17 PIA flights would bring back Pakistani citizens who were either stranded or whose visas had expired from different countries including Canada, the UK, Turkey, Malaysia and Azerbaijan.

“Around 2,000 passengers will be brought back,” the PM’s aide said. “However, this will be done according to our testing capacity.”

Speaking on the occasion, Health Minister Dr Zafar Mirza urged the nation to unite in its fight against Covid-19. “As a nation, we should work together to make these measures more effective,” he said.

The army chief attended a special briefing held at the National Command and Operation Centre (NCOC) in Islamabad.

“The Pakistan Army, being part of the national effort [against Covid-19], will not leave any stone unturned for the security and safety of the people of Pakistan,” the Inter-Services Public Relations (ISPR) quoted Gen Qamar as saying.

“We must rise… and rise together irrespective of caste, colour, creed and religion fighting as one nation,” the chief of army staff said.

“The task at hand is daunting, but we have overcome difficult situations before. This time the challenge is entirely different.”

The NCOC was briefed about the latest situation on containment efforts and enforcement measures against the pandemic and troops deployment across the country assisting federal and provincial administrations. Gen Bajwa said all necessary measures to ensure public safety were being taken.

“We cannot afford to leave any segment of society at the mercy of this pandemic,” he said. “The troops on the ground must reach out to citizens in every nook and corner of Pakistan not only to protect them against this pandemic but also for bringing them comfort in this hour of distress.”

The army chief said all vulnerabilities could only be addressed through a coherent national effort before they turned into threats. “Planned measures, if implemented timely, will contribute to the safety and well-being of every Pakistani and the society at large.”

According to the ISPR, the forum expressed complete satisfaction over the measures taken thus far and also dilated upon the future course of action. The military’s media wing also said Commander Army Air Defence Command Lt Gen Hamooduz Zaman Khan had been designated as the NCOC chief coordinator.

The NCOC is serving as a nucleus for a one-window operation to synergise and articulate the national efforts against Covid-19, optimise informed decision-making and ensure the implementation of decisions of the National Security Committee and the NCC.

Experts warn against unsupervised use of chloroquine, HCQ