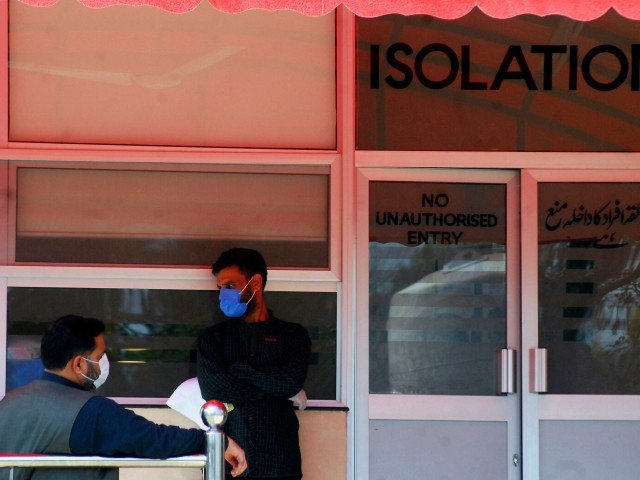 ISLAMABAD / RAWALPINDI: At least three more people recovered from the novel coronavirus (Covid-19) in Islamabad on Tuesday. However, at least seven new cases were reported at the same time.

Meanwhile, those who work in non-essential but daily wage sectors such as cobblers, barbers and tyre shop workers have urged the government to allow them to open their stores.

A daily situation report on Covid-19, issued by the National Institute of Health (NIH), showed that seven more cases of the virus were confirmed on Tuesday, taking the tally of Islamabad to 58.

It noted that no fatality from the virus has been reported in the federal capital over the past day. As many as 16 people remain under treatment at the health facilities in the city while other 39 have been quarantined at their homes.

During this period, at least three patients were discharged after full recovery.

With the lockdown amidst the novel coronavirus (Covid-19) entering its second week, the closure of businesses deemed non-essential is not only having an impact on those who work in these businesses but also customers even as the number of cases in the federal capital rose by seven on Tuesday.

Among those particularly struck hard by the curfew-like situation are small cobblers, hairdressers and even those manning tyre shops across the garrison city.

Not considered as essential unless one felt the need for their services, those who operate these establishments have joined the ranks of the thousands who have lost their source of income to the lockdown. They are now worried about their survival in such times.

For those who regularly utilised the services of barbers, cobblers to maintain their appearance said that they felt unkempt.

Locals of the garrison city told The Express Tribune that they have been moored at home as they practise social distancing. Used to getting a facial trim or getting rid of stubble before the Friday prayers, they said that their appearance has become messy as they have not been able to visit a barber for over a week now. Others said that they were used to getting their shoes polished every morning before going to work. But since they have been stuck at home, their shoes have taken on a scuffed appearance.

Those who have had to venture out of their homes to either acquire essentials or are part of essential services and have to report to their offices, face a complicated situation if their vehicles develop a flat.

Locals said that in the absence of services such as tow trucks or taxis, they are forced to push their vehicles to the few tyre shops that are open during the restricted hours.

The people of the garrison city, including those who work in these establishments and those who avail their services, have demanded that the government allow such services to operate even during the lockdown to facilitate the people.

At a news conference on Tuesday, Islamabad Capital Territory (ICT) Deputy Commissioner Hamza Shafqaat said that they were strictly monitoring visitors coming to the federal capital.

“We are even monitoring those who have been released after full recovery (from the virus),” he said, maintaining that all areas, where positive cases were reported, remain sealed.

He reiterated that anyone coming to the federal capital must undergo screening.

“Around 60 per cent of cases in Islamabad have a travel history,” he said.

To increase the effectiveness of the lockdown and to enforce the Coronavirus Ordinance by the Punjab government, some employees of various establishments were fined on Tuesday.

Rawalpindi Deputy Commissioner (DC) Captain (retired) Anwaarul Haq on Tuesday tasked the Civil Defense Department (CDD) of the district to ensure that the guidelines outlined under the ordinance are being followed by the exempted businesses.

In the purview of this, the CDD teams imposed fines worth Rs50,000 on 11 employees working at fuel stations, grocery stores and two vegetable vendors with a warning.

Under the ordinance, all employees working at shops exempted from closure have been directed to wear gloves and face masks during duty hours and to sanitise their hands frequently. Those violating the orders will face fines and even detention. On the first violation, a fine of Rs50,000 will be imposed with two months detention while on the second. the imprisonment period will be six months and the fine will be enhanced to Rs0.1 million. On flouting the orders for the third time, the shopkeepers will be tried by a magistrate who will determine an adequate imprisonment period for the violator.