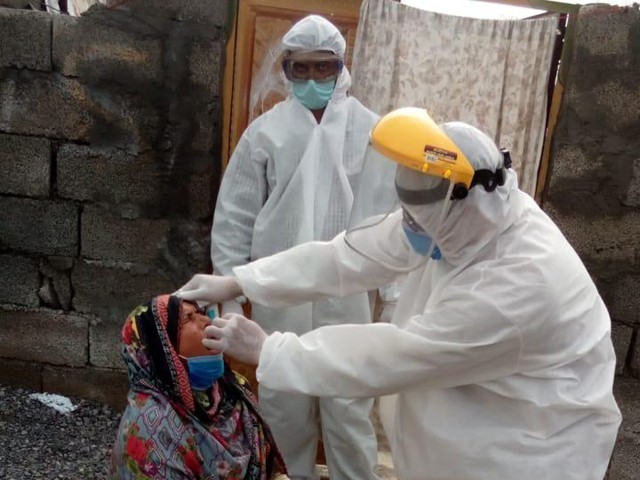 Two people, who had tested positive for the novel coronavirus (Covid-19) and were receiving treatment at health centres in Rawalpindi, died on Monday as the number of positive cases for the virus swelled in the twin cities.

Those who died on Monday, one was receiving treatment at the Benazir Bhutto General Hospital (BBH) in Rawalpindi. The patient hailed from the Jhelum district of the Rawalpindi division.

The other fatality also took place in Rawalpindi. The victim, a woman, had returned to the country from Saudi Arabia after performing Umrah around a month ago. She had been admitted to the General Hospital in her native Wah area but was later shifted to Rawalpindi where she succumbed to Covid-19.

The total number of deaths by the deadly virus in Punjab has increased to eight.

Meanwhile, the Rawalpindi administration has completely sealed off a street in the College Road area after a man tested positive for the coronavirus (Covid-19).

The teams also pasted notices at the entry points of the sealed street that any kind of movement is not allowed and that residents should stay indoors.

Meanwhile, the Rawalpindi Deputy Commissioner (DC) Capt (retired) Anwarul Haq visited houses in the Dhoke Paracha area, which has been worst-hit from Covid-19 in the district with a cluster of 14 cases reported there.

DC Haq inquired after the health and problems faced by people isolated in their homes. He directed health and district officials to visit all such houses frequently to take care of the everyday needs of the internees.

He said that teams of the health department are taking all precautions while patients are shifted to the Rawalpindi Institute of Urology and Kidney Transplant (RIUKT), which has been dedicated as an isolation and treatment facility for Covid-19 patients.

Further, some 57 people who were quarantined at the isolation centre set up at Pir Mehar Ali Shah Arid Agriculture University (PMASAAU) were reported to have been tested negative. Most of them were relatives of the infected patients however the medical reports have cleared all suspicions.

Apart from this, the district health authority has enhanced the collective capacity of beds in all non-hospital quarantine centres established in Rawalpindi to 2,000.

Meanwhile, the number of Covid-19 positive cases in Islamabad swelled to 51. So far, some 1,310 suspected cases of Covid-19 have been reported in the city, including 133 in the past 24 hours.

However, 13 positive patients are being treated in hospitals while another 35 have been quarantined in their houses while at least three patients have recovered from the disease.

The main commercial markets and business activities of the twin cities of Islamabad and Rawalpindi remained shut for a seventh consecutive day on Monday with the roads largely deserted and people hunkering down in their homes due to the pandemic.

Few vehicles plied on the thoroughfares. Most of the vehicles were trucks carrying goods. Some taxis kept ferrying people to their destinations in the suburban areas of Islamabad and Rawalpindi.

Multiple police pickets were erected on different roads and thoroughfares of the twin cities to ensure that the people do not venture outside aimlessly.

Only dairy, grocery, fruit, vegetable, poultry, meat shops, drugstores, and other essential services raised their shutters from 10am to 4pm. Labourers and technicians like plumbers were seen standing and sitting by the roadside at various intersections in Rawalpindi, hoping to get some work.

However, in the suburban areas of Rawalpindi, children continued to play outside their homes while motorcyclists rode pillion fearlessly as the police failed to enforce section 144 adequately.

Three buildings in the federal capital were declared as quarantine centres on Monday.

A notification released by ICTA said that a quarantine facility has been set up in the Pak-China Friendship Centre, which will be looked after by Dr Sartaj. The other two quarantine facilities include the one at Haji Camp and the Oil and Gas Development Company Limited (OGDCL). Dr Sabir Ayub and Dr Waleed will look after these facilities respectively.

In case of an emergency, the government has identified two private hotels which can be converted into quarantine facilities.

With additional input by agencies

Pakistanis stranded in India running out of cash and time