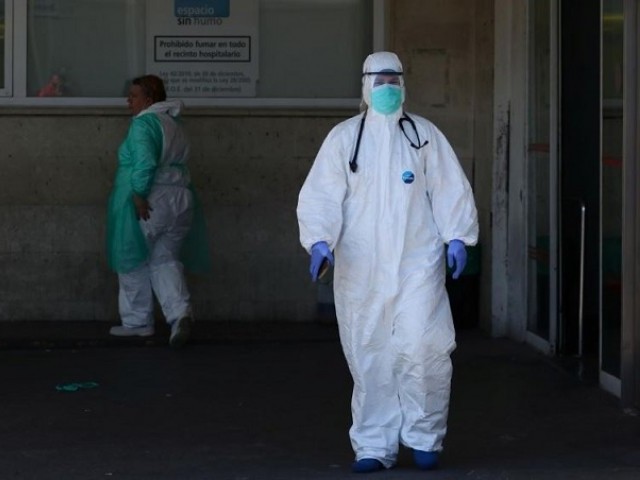 A healthcare worker is seen near the emergency unit at 12 de Octubre hospital during the coronavirus disease (COVID-19) outbreak in Madrid, Spain. PHOTO: REUTERS

MADRID / ROME: Spain’s total number of coronavirus cases rose to 85,195 on Monday from 78,797 on Sunday, the country’s health ministry said, as the infections surpassed those reported in China, at 81,470 according to the latest data.

On Sunday, Italy on Sunday reported 756 new deaths from coronavirus, bringing the total number of victims to 10,779, still the highest in the world.

The latest figures provided by the Italian Civil Protection Department, however, showed that both the daily death rate and the increase in the number of contagions continued to slowdown compared with the previous days.

Current contagions rose by 5 per cent to reach 73,880, the same percentage rise seen on Saturday. The total number of recoveries reached 13,030.

The epicentre of the outbreak in Italy is still the northern Lombardy region, which counts 6,360 victims alone.

Italian experts say the country hasn’t reached the peak of contagions yet, but is starting to get closer to that.

The government is expected to approve a new decree by the beginning of April that will likely extend the lockdown measures for at least two weeks.