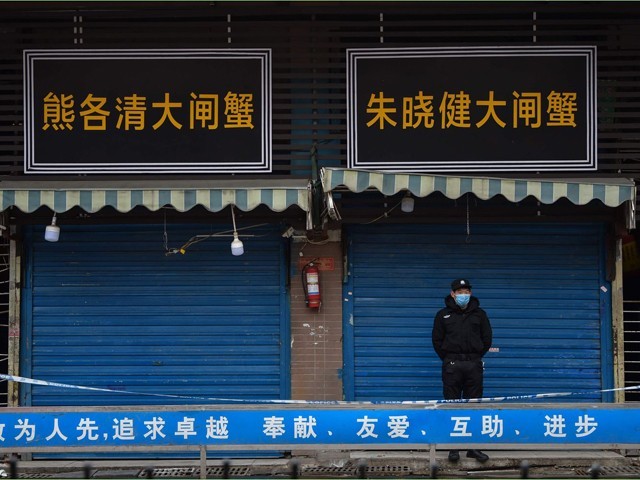 A security guard stands outside the Huanan Seafood Wholesale Market where the coronavirus was detected in Wuhan. PHOTO: AFP/FILE

A shrimp vendor at China’s Wuhan seafood market, where the coronavirus pandemic likely began, has been identified as one of the first victims of the disease and possibly the “patient zero”.

The novel coronavirus has spread to all continents excluding Antarctica. The COVID-19 respiratory illness caused by the virus has so far killed thousands of people and infected more than half a million others across the globe.

The infestation has been contained by the Chinese government in Wuhan, where lockdown restrictions have been eased by the authorities.

Wei Guixian, a 57-year-old female shrimp seller at the Huanan Seafood Market, says she was at her shop on Dec 10 when she developed a cold, international media reported quoting a report from The Paper, a Chinese publication.

So she walked to a small local clinic for treatment and then went back to work, likely spreading the contagion.

“I felt a bit tired, but not as tired as previous years,” she told The Paper, according to a translation by news.com.au. “Every winter, I always suffer from the flu. So I thought it was the flu.”

She visited a local clinic on December 11 and received an injection, but didn’t feel any better, so she went to the Eleventh Hospital in Wuhan.

“The doctor at the Eleventh Hospital could not figure out what was wrong with me and gave me pills,” Wei told the Chinese outlet but those didn’t work either.

“By then I felt a lot worse and very uncomfortable,” Wei said. “I did not have the strength or energy.”

On December 16, Wei went to Wuhan Union Hospital — one of the city’s biggest — to get checked out.

A doctor there described her illness as “ruthless” and told her several other people from the same market had already come in with similar symptoms.

By the end of the month, she was quarantined when doctors finally established the link between the emerging bug and the seafood market, the Chinese outlet reported.

A December 31 statement from the Wuhan Municipal Health Commission revealed that Wei was among the first 27 patients to test positive for COVID-19, and one of 24 cases with direct links to the seafood market.

Wei, who has since recovered and left the hospital in January, said she thinks she contracted the infection from a toilet in the market she shared with meat sellers and others.

The vendors who worked on either side of Wei, along with one of her daughters, a niece and the niece’s husband, also caught the deadly bug, The Paper reported.