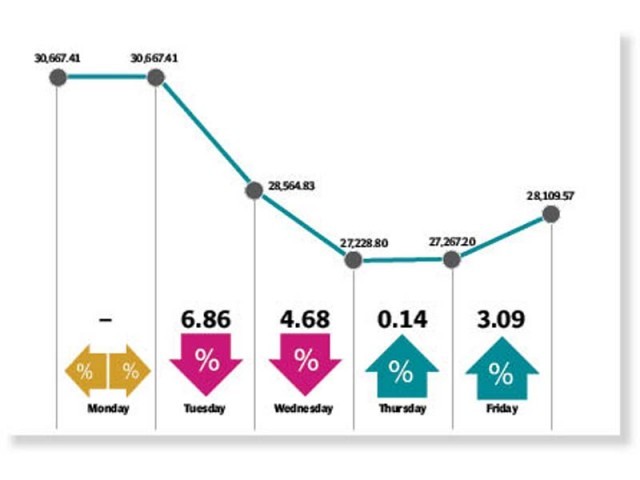 KARACHI: The Pakistan Stock Exchange (PSX) continued to be ravaged as the pandemic worsened; however, a financial package announced by the government helped arrest a further downward spiral at the stock market. The KSE-100 plunged 2,557 points or 8% in the outgoing week to settle at 28,110 points.

With Monday a holiday on account of Pakistan Day, trading kicked off on Tuesday on an extremely bearish note. After recording the worst loss since 2008 in the past week, the index had plummeted even further as it breached the 29,000-point barrier when trading resumed after a three-day break. The sharp decline had once again triggered a halt in trading activity, this time for two hours.

The downtrend came on the back of fears that a global recession was imminent as the coronavirus pandemic forced many countries across the world to go into lockdown. Policymakers across the globe were looking to stave off a deep economic freeze from the lockdown and travel bans through a slew of monetary and fiscal measures.

The following session brought no respite, as stocks bled with the index diving to its lowest level since March 2014. Triggered by continued panic selling as investors weighed the economic impact of the industrial lockdown in almost the entire country, the index dived to below 27,500.

During the week, the Monetary Policy Committee held an emergency meeting that culminated in a 150bps cut in the policy rate, mere days after a 75bps cut. Cumulatively, the two announcements have brought the policy rate down to 11.00%. Meanwhile, the government announced a substantial support package worth over Rs1tn to keep the economy afloat.

Following these developments, the tables turned on Thursday as the index turned bullish as investors welcomed a further rate cut and relief package from the cabinet. Despite investors weighing the fallout from the coronavirus, the market finished the last two sessions in the green. The uptrend was fuelled by the measures taken by the State Bank of Pakistan (SBP) and Pakistan Banks Association (PBA), coupled with recovery in Asian markets. Moreover, speculation about likely approval of $1.4 billion in an International Monetary Fund (IMF) loan for economic relief further strengthened investors’ sentiment.

On the other hand, rupee depreciation against the dollar during the week also maintained pressure at the PSX as the currency fell to record lows before recovering to close at 165.5.

Foreign selling continued this week clocking-in at $13.7 million compared to a net sell of $19.6 million last week. Selling was witnessed in commercial banks ($5.3 million) and E&P ($3.5 million). On the domestic front, major buying was reported by individuals ($6.2 million) and insurance companies ($5 million).

Among major news of the week was; massive dip in POL products use after lockdown, companies shut plants amid lockdowns, FFC reduced Sona urea price after GIDC waiver, ECC approved tariff hike of up to Rs2.89 for K-Electric, and SBP unveiled debt relief measures for individuals, businesses.