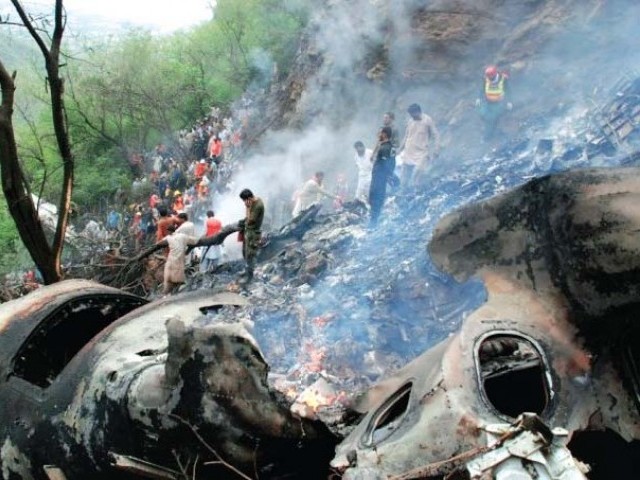 An Airblue flight crashed last year on July 28 in Margalla hills, enroute to Islamabad from Karachi. Over 150 passengers on board had lost their lives.

KARACHI: The Sindh High Court (SHC) issued notices to Airblue airlines and the Civil Aviation Authority (CAA), on Wednesday, after a petition was filed by the widow of a German victim in the Air Blue crash last year.

She stated in the petition that even after one year, the airline had failed to provide any compensation which is why she has moved the court for justice.

The court has issued notices to Airblue, CAA and other relevant authorities for September 15.

According to an earlier report, Airblue’s Director Corporate Affairs, Sadia Mohammad had said that 39 families had received the final compensation of Rs5 million whereas Air Blue has already paid out Rs0.5 million to all 146 families.

Furthermore, Airblue’s investigation team had completed its report and submitted it to the ministry of defence, according to a letter available with The Express Tribune.

Earlier in June, a two-member bench of the Peshawar High Court (PHC) has issued notices to Airblue airline, the federal government and the Civil Aviation Authority (CAA) to explain their positions in a writ petition filed by family members of the victims of the fatal crash, praying to the court to ground all domestic and international flights of Airblue till the findings of an independent board of inquiry are made public and a definite declaration is made that the aircraft are safe to fly.

The defence ministry had been asked to submit its report on the Air Blue crash investigation before a parliamentary panel on human rights within three months.

An Airblue plane crashed last year on July 28 in Margalla hills when it was enroute to Islamabad from Karachi.

Over 150 passengers on board including the German national, Doctor Marko, lost their lives.