KARACHI: The Sindh government’s decision to ban congregational prayers, as another measure to flatten the COVID-19 curve, was met with resistance on Friday, with scores of people flouting lockdown orders to flock to mosques across Karachi.

This was despite the routes leading to most major mosques being blocked, and many mosques having their doors locked.
Some reached the mosques long before the time for Friday prayers, later joined by others. Though the police and Rangers personnel, deployed outside all the major mosques of the province, continued to implore the enraged, aggrieved and exasperated crowds to not to enter the mosques, these appeals did little to appease the worshipers.

In a video that went viral on social media, Kharadar SHO Ahsan Zulfiqar can be seen behind the closed gates of the New Memon Masjid, appealing to the people to return home as the mosque is closed for congregations.

Despite police and officials urging people to stay home and closing the mosque entrance, over a hundred people prayed on the premises.#CoronavirusPakistan

“The government has made its decision for your safety. When the Holy Kaaba is closed and the Saudi government is planning to cancel Hajj, then why are you insisting on coming inside and offering prayers?” he asked. “The mosque committee has also agreed to close its doors to the public, so please go and pray at your home. This is my request.”

But the crowd of people standing outside the mosque became emotional and started shouting slogans, eventually compelling the police officials to open the mosque’s doors. “I just want to offer the Friday prayer,” an elderly man appealed to the police.

Over time, the crowd swelled, as hundreds from nearby neighbourhoods, in some of which local mosques were kept closed, gathered around the mosque.

Later, riled up by the situation, they tried to stage a demonstration and slammed the government for the suspension of congregational prayers, but were dispersed by police.

The same situation was witnessed out the Quba Mosque in Defence View Phase-II, where police, using loudspeakers, requested worshipers to go back to their homes, but in vain.

“Life and death is in the hands of Allah. The Western countries have created fear in the name of the virus. We will prefer to die, but cannot stop congregational prayers,” said Qadeer Khan, a disgruntled citizen, standing outside the mosque.

Outside another mosque in Kharadar, a man, seemingly oblivious to the pandemic threat, asked, “How many people have died due to the disease?” He said he had no issues staying at home but it was “unfair” to not let people offer Friday prayers in congregation.

The police and Rangers did their best to convince people that not just the government, but religious scholars too had called for the suspension of congregational prayers at mosque, advising them to pray at home. In several neighbourhoods, clerics made announcements, asking people to not to come to mosques for Friday prayers.

Yet, people came out in large numbers, and crowded the streets outside mosques, some demanding to enter the mosque, others protesting the suspension of congregational prayers and some waiting in the hope that they would be allowed to offer the obligatory rakats there.

And then there were those who eventually offered congregational prayers in Karachi and rest of the province, risking their own health and safety as well as those of others.

According to officials in the Sindh government, police arrested people in Sukkur and other districts for violating the ban on Friday.
Meanwhile, Sindh Chief Minister Syed Murad Ali Shah, while chairing a meeting on Friday, took strong exception to people offering congregation prayers in mosques.

He said that imposing the ban had been a difficult decision, made with a heavy heart. “We took this decision after proper consultation with ulema of different schools of thought as well as other stakeholders,” he pointed out. “It is aimed at saving people from local transmission [of coronavirus].”

Shah revealed that he himself had offered the Friday prayers at his home. “I followed the imam of our mosque, who was leading the prayer from the mosque on the loudspeaker. We should all follow this observance.”

The Sindh government had announced the ban on congregational prayers on Thursday. Following the development, Sindh Information Minister Nasir Hussain Shah had said, “We will take action if anyone violates the Sindh Epidemic Disease Act, 2014, under which the ban is imposed.” 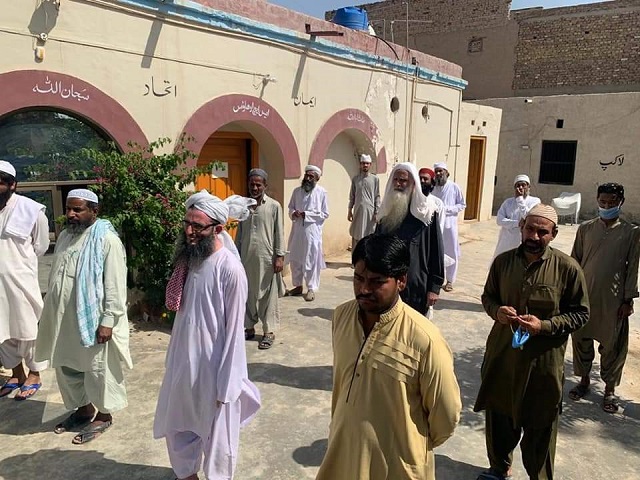 People kept at a distance after they insisted on offering prayers, they were later arrested. Photo: EXPRESS