Tourna­ment set to take place on June 29, but virus outbre­ak may cause proble­ms
By AFP
Published: March 26, 2020
Tweet Email 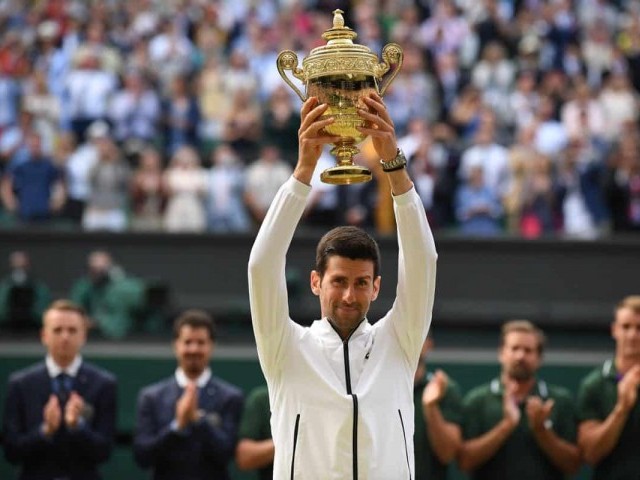 The continuing spread of the coronavirus has caused havoc with the sporting schedule and the grass-court Grand Slam, Wimbledon, could be the next major event to be delayed. PHOTO: AFP

LONDON: Wimbledon could be postponed or even cancelled after All England Club chiefs called an “emergency meeting” for next week to discuss whether to go ahead with this year’s tournament amid the coronavirus outbreak.

Wimbledon is set to start in London on June 29, but the continuing spread of the virus has caused havoc with the sporting schedule and the grass-court Grand Slam could be the next major event to be delayed.

“The AELTC can confirm that it is continuing a detailed evaluation of all scenarios for The Championships 2020, including postponement and cancellation, as a result of the COVID-19 outbreak,” an All England Club statement said on Wednesday.

“An emergency meeting of the AELTC Main Board is scheduled for next week, and in preparation we are communicating closely with the LTA, and with the ATP, WTA, ITF and the other Grand Slams.”

The French Open was the first of this year’s three remaining Grand Slams to be postponed due to the virus.

Originally scheduled to run from May 24 to June 7, the clay-court tournament was moved to September 20 by the French Tennis Federation in a move that angered some players.

The new date for Roland Garros is just one week after the US Open finishes and clashes with the Laver Cup, the popular exhibition team competition set up by Roger Federer and featuring leading players from Europe and the rest of the world.

Wimbledon, whose singles titles were won by Novak Djokovic and Simona Halep last year, is the crown jewel of the sport’s four Grand Slams.

But moving it deeper into the tennis calender might be tricky after the outcry over the unilateral French Open switch.

Euro 2020 and the Tokyo Olympics have both been put back by a year to allow the health crisis to be resolved.

Pressure is growing on the All England Club to make a decision and organisers have ruled out playing the tournament behind closed doors.

“The build for The Championships is due to begin at the end of April,” the statement said.

“At this time, based on the advice we have received from the public health authorities, the very short window available to us to stage The Championships due to the nature of our surface suggests that postponement is not without significant risk and difficulty. Playing behind closed doors has been formally ruled out.”