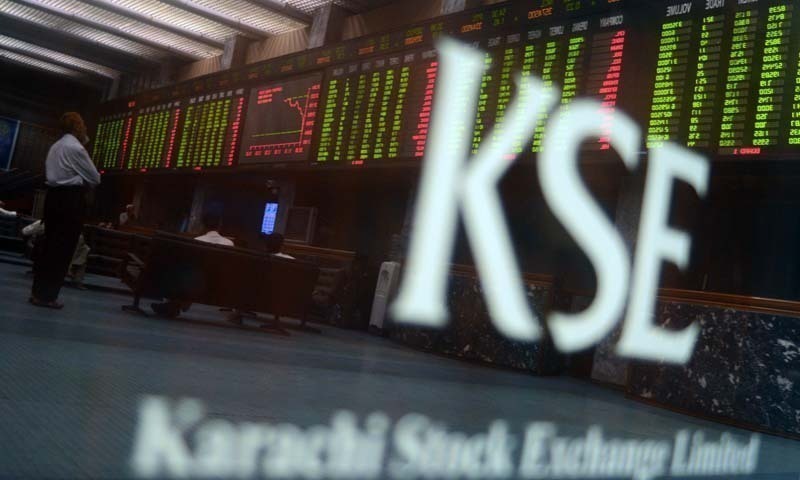 KARACHI: The Pakistan Stock Exchange (PSX) exhibited a turnaround on Thursday as the KSE-100 index soared over 900 points in intra-day trading before giving up almost all the gains and closing with a meagre increase of 38 points.

Investor sentiment strengthened after the International Monetary Fund (IMF) and the World Bank called for suspending debt payments by the poorest nations.

Additionally, the measures taken by the central bank to facilitate virus-hit local markets lent further support. There was talk in the market that the State Bank of Pakistan would announce further measures on Thursday, which kept the index in the positive zone.

Earlier, the PSX’s benchmark KSE-100 index had dropped 28% or 10,500 points in the past three weeks amid concerns over the coronavirus pandemic.

Trading began on Thursday with a dip, however, the index began climbing shortly afterwards and crossed the 28,000-point mark by midday. Later, the trend reversed, which wiped off most of the gains, resulting in flat close of the market.

The SBP confirmed to The Express Tribune that it was mulling over some measures for the relief of PSX. It issued a notification in that regard late in the evening. The speculation suggested that SBP measures would be aimed at creating liquidity in the market.

Arif Habib Limited, in its report, stated that the market opened down by 182 points and traded one million shares at the opening bell.

“Sentiment remained positive throughout the session, although selling pressure was also observed both by profit-takers and investors stuck with margin calls,” it said. “The index recorded a surge of 963 points during the session and closed up by 38 points, having traded a total of 186 million shares.”

Overnight, the IMF and World Bank’s joint statement on the suspension/ forbearance of outstanding debt for International Development Assistance (IDA) countries, including Pakistan, contributed to the improvement in investor sentiment.

Support also came from the regulatory measures introduced by the government including elimination of capital value tax (CVT) on capital market transactions, easing liquidity of asset management companies, and ban on short-selling.

The cement sector led the volumes with trading in 33.5 million shares, followed by power companies (28.6 million) and banks (22.8 million).

Despite opening negative, the benchmark index rose to a high of +962 points as institutional participation was witnessed mainly in the main board stocks. However the market soon came under pressure to finally close at 27,267 (+0.14%).

“Positive sentiment can be attributed to attractive valuations of the KSE-100 index stocks,” he said. “Overall volumes stood at 187 million shares while traded value came in at $33 million.”

“Going forward, we expect the market to remain bearish as the coronavirus situation prevails across the globe and recommend investors to stay cautious,” he said.

Overall, trading volumes increased to 186.7 million shares compared with Wednesday’s tally of 145.1 million. The value of shares traded during the day was Rs5.5 billion.

Shares of 347 companies were traded. At the end of the day, 152 stocks closed higher, 182 declined and 13 remained unchanged.