Only two new cases confir­med by the health depart­ment in K-P as govt appoin­ts 638 medica­l office­rs
By ​ Our Correspondents
Published: March 26, 2020
Tweet Email 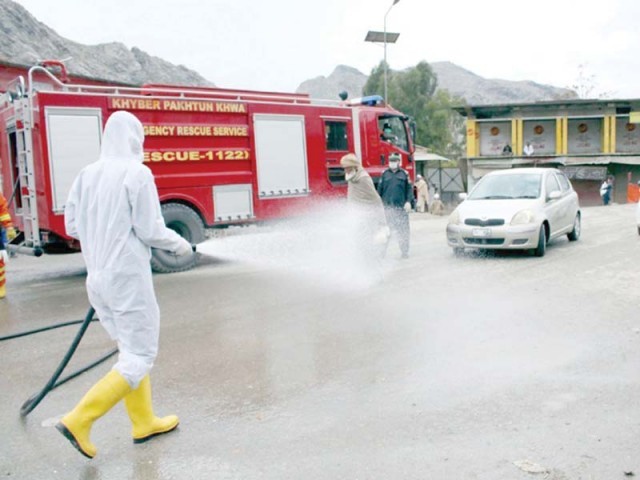 PESHAWAR: The top health official in the province on Wednesday said that as many as 39 people from the Manga Union Council of Mardan district, where the first official novel coronavirus (Covid-19) casualty of the country took place, have tested positive for the virus. However, a daily situation report issued by the provincial health department only confirmed two new cases in the province.

Khyber-Pakhtunkhwa (K-P) Health Minister Taimur Saleem Jaghra on Wednesday, in a video statement, said that swab samples of 46 people, who came in contact with the Covid-19 victim Sadaat Khan in the Managa UC, the first coronavirus death of the country, were sent for tests.

“Sampling has shown that out of 46 people tested in the UC, 39 tested as positive,” he said, adding, “All tested were asymptomatic.”

The health minister further said that three people had tested negative while four samples were rejected.

Urging the public to remain at home, the health minister said that the rising number of patients in the Mardan union council was a lesion that everyone should strictly follow the government’s lockdown instructions so that the virus can be stopped from spreading.

At least two others, who had gone for Umrah along with the deceased Sadaat, had also tested as positive, the minister added.

A situation report issued by the provincial health department later on Wednesday, however, said that only two new cases had been confirmed in the province over the past 24 hours, while 138 suspected cases had surfaced.

The confirmed cases were in Khyber tribal district and Swabi.

In Mardan, the health department said, had increased from 50 on Tuesday to 165 on Wednesday, with 107 suspected cases detected. It added that a medical team from the Khyber Medical University (KMU) had visited the UC on Wednesday and took 28 samples from quarantined individuals, while 59 samples were taken from the community residing in adjoining areas.

K-P Health Department has appointed 49 focal persons on coronavirus across the province.

A notification issued in this regard said that these people will perform duties in all districts of the province to facilitate the public apart from updating the health department on Covid-19 from their respective areas, the notification read.

The provincial government has decided to recruit as many as 638 additional medical officers. K-P Chief Minister Mahmood Khan has approved a summary in this regard.

All these staffers will be hired in basic pay scale grade (BPS) 17 on six month-long-contracts. The contracts can be extended upon good performance.

Meanwhile, North Waziristan district administration on Wednesday said it has screened the 1,336 newly-arrived Pakistanis from abroad for Covid-19.

North Waziristan Deputy Commissioner Shafiullah Gandapur on the directives of the provincial government collected data of the people of the district who had recently returned from foreign countries.

The deputy commissioner said swab samples of the people who had recently returned to the area from abroad were shared with the NIH a few days ago and none of them has tested positive.

Meanwhile, Abbottabad District Health Officer Dr Faisal Khanzada on Wednesday shifted three doctors to a quarantine centre in the district on suspicion they could be infected. As a further precautionary measure, a bakery where the doctor and some of his friends had shopped was also sealed.

Sources said that a Swat-based doctor had returned from the US last week and had immediately self-quarantined himself in his village. However, he travelled to Abbottabad city yesterday and took up accommodation in the Jinnahabad area.

Upon receiving information from the Swat district health authorities, the health authorities in Abbottabad traced the doctor and his two medical colleagues. Police cordoned off the street on which they were living and movement in the locality was restricted as the three suspected patients were shifted to a quarantine.

No bent rules for overage recruits of education dept