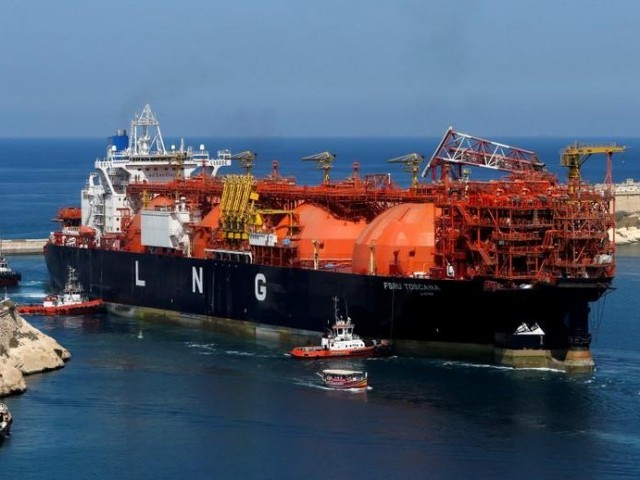 ISLAMABAD: Following a crash in global liquefied natural gas (LNG) prices, the private sector is pressing the government to remove bureaucratic hurdles in the way of import of cheaper gas.

This way, it says, the basket price of LNG can be pushed down in the country by revising the current pricing formula and cutting local gas production in order to preserve it. The government had allowed the private sector import of LNG in July last year, however, after the passage of months not a single ship has docked in the country due to bureaucratic hurdles.

The Oil and Gas Regulatory Authority (Ogra) is notifying LNG prices on a monthly basis by taking the average price for three months.

The private sector has suggested that the government should immediately revise the LNG pricing formula by linking it with the monthly average price rather than the three-month average to reap the benefit of gas price crash in the global market in the wake of coronavirus pandemic.

Background discussions with different sectors revealed that the global LNG price had been lower than local prices of gas, therefore, the government should reduce the production of natural gas for the time being to take advantage of the price crash in the world market.

“Following the agreement with Qatar, the 90-day average of Brent crude today stands at $52 per barrel and 13.37% of that is the LNG price, which is $6.76 per million British thermal units (mmbtu),” said an industry official.

“But today if the private sector makes direct import, when the Brent crude stands at around $28, the LNG price will be $3.64 per mmbtu.”

It was around 50% cheaper compared to the local gas, so the government should stop buying local gas for some time and focus on importing more LNG, the official added.

The previous government had set up three LNG-based power plants in Punjab and LNG import was meant for these plants. Now, the industry is running on subsidised LNG, fertiliser plants are closed due to higher LNG prices and compressed natural gas (CNG) outlets are operating on LNG with a price differential of Rs3 per litre compared to petrol.

“We, as the private sector, can help to reduce gas prices in Pakistan with the reduction in subsidies,” said All Pakistan CNG Association Chairman Ghiyas Paracha.

“We should maximise our imports of LNG and preserve local gas for future; when world market prices go up and we can use the local gas to our advantage,” suggested another official.

He said the government must allow private sector import of LNG, which would compete with the gas-importing government entities, and private-sector imports at cheaper rates would reduce the collective basket price of LNG.

Pakistan has several contracts for LNG purchase, which are based on volumes and prices. The basket price is 12.8% of Brent crude.

However, the government took the three-month average price, which stood at $50 per barrel and, therefore, the benefit of the drop in global prices was not being passed on to the consumers, said the industry officials.

They said LNG could also be consumed by the domestic consumers while preserving local gas. However, they added that the better option was that the government should allow the private sector like fertiliser, textile and CNG to import LNG at lower rates.