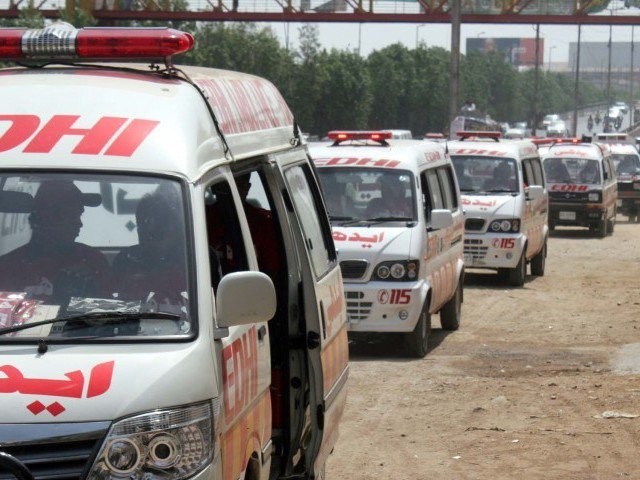 Edhi workers taking patients to public and private hospitals told there are no facilities to admit them. PHOTO: PPI/FILE

KARACHI: Over a dozen suspected coronavirus patients from across the city were denied entry into public and private hospitals in Karachi, The Express Tribune learnt on Wednesday.

“The number of suspected patients is going up as each day passes,” said Edhi Foundation chairperson Faisal Edhi. “The hospitals have been refusing to take them in since Tuesday,” he disclosed, adding that Edhi workers had been told that the hospitals did not have the facilities to take them in.

Speaking to the Express Tribune, Edhi said that his foundation’s ambulances had been transporting these patients to the hospitals and then taking them back to their homes when they were turned away from the medical facilities.

However, Dr Khadim Hussain Qureshi, the medical superintendent of Dr Ruth Pfau Civil Hospital Karachi, claimed that not a single patient had been refused admission. “We cannot say no to any patient.”

Dr Qureshi told The Express Tribune that patients suspected of having COVID-19 were admitted, though several of them opted to isolate themselves at their residences and were allowed to go. “Even those who stay at home, though, are being checked up on regularly,” he stated, adding that his hospital was not yet burdened in the ongoing crisis. “We are still functioning smoothly.”

Sharing data, he said that nine suspected patients were brought to the hospital on Tuesday, of whom three were discharged after treatment. “We are providing the best possible care to each patient, including those who are suspected of having the virus,” he insisted.

Meanwhile, Anjum Rizvi, the spokesperson at Liaquat National Hospital, one of the city’s major private hospitals, said that they had curtailed the out-patient departments (OPDs), in line with the Sindh government’s directives, to avoid an excessive turnout of patients. “Only emergency cases and those in urgent need of a doctor are being received,” he explained.

He added that the hospital did not have coronavirus testing kits, saying that this was the reason why patients with COVID-19 symptoms were not contacting them.

Who is receiving patients?

Sindh health department spokesperson Meeran Yousuf told The Express Tribune that there were only three hospitals in the city capable of receiving coronavirus patients. Of these, she added, the Aga Khan University Hospital was currently not admitting patients.

She advised that those suspected patients who were able to stay at home in isolation should do so, instead of rushing to the hospital. “If someone is living with their family and cannot afford to isolate themselves separately, they can go to the isolation centre,” she added.

She also disclosed that the health department was considering providing testing facilities to another major hospital in the provincial capital – the Jinnah Postgraduate Medical Centre (JPMC).

Meanwhile, JPMC executive director Dr Seemin Jamali said that patients were constantly arriving at the hospital. However, she stated, the number of patients visiting the OPDs and emergency had dropped due to the province-wide lockdown that has been imposed by the Sindh government in an attempt to curtail the spread of coronavirus.

“However, despite clear guidelines issued by the government and health authorities, attendants with patients appear to be reluctant to obey orders,” she complained, adding that law enforcement agencies should assist the hospitals in restricting the entry of too many attendants.