The Taliba­n would need contin­uous financ­ial aid to run the govern­ment, hence the levera­ge with the world
By Inam Ul Haque
Published: March 26, 2020
Tweet Email 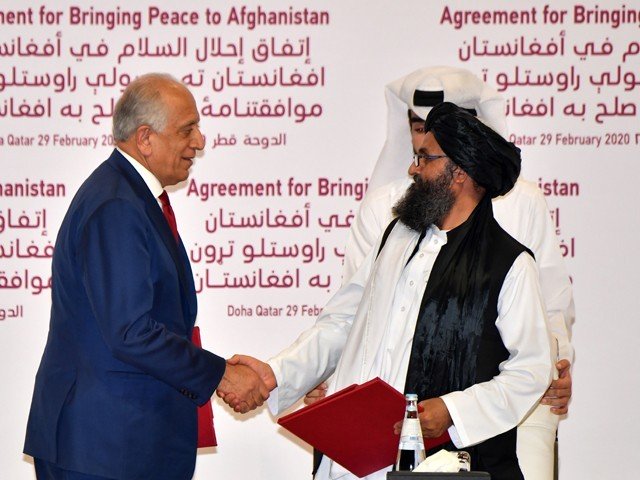 It is interesting to watch the coverage and commentary on the US-Taliban peace deal of February 29, 2020. It is sad to see most Afghan analysts following the Western talking points, alleging that the Taliban are feigning peace; that they cannot be trusted; and that they would brutalise the Afghan liberal brigade like they did before. Let’s get down to basics, as basics are forgotten in a debate without focus.

Who brought a semblance of peace and stability to Afghanistan, after the era of warlords in the 1990s, guaranteeing the most important right — the right to live? Who were removed from power by the invaders and for what crime? Who fought the war of liberation? Who nurtured the war of freedom with their blood and sweat? Who did not succumb to Western inducements and pressures and remained steadfast to their fatherland rather than leaving for greener pastures, and then returning to rule their country on the shoulders of invaders? Who wrote the glorious chapters of contemporary Muslim military history by defeating two superpowers — an aberration from the norm? Who can stand like a bulwark against the greater menace of ISIS? And who can make Afghanistan peaceful, govern it and protect its nationhood? The answer to all the above questions is unquestionably the Taliban.

One might think differently but facts are facts and reality cannot be blinked away; so, a little realism in analysis would do well to the war-weary Afghans, whose love causes the analyst community many sleepless nights. Have we forgotten that the CIA paramilitaries riding with Shumali warlords, were hand-in-glove to drive the Taliban from power through incessant machinations and B-52 carpet-bombing, with Sheberghan happening right under their nose? The crime of the Taliban was sheltering Osama bin Laden — the presumed and yet to be proven mastermind of 9/11. The US decided to invade Afghanistan in the footsteps of imperial Britain and Soviet Union, only to end up in the graveyard of empires. And true to their character, the Shumali warlords and opportunists of all shades, rallied around the invaders under the coat and tie leadership of imported expat community — with dual-nationality to “modernise Afghanistan making it heaven on earth”. And for 19 long years, through shifting politico-strategic goals, corruption at the mega scale, vacillation reinforced by a lack of sociological understanding of a tribal society, with a deeply entrenched love of Islam, this enterprise failed and failed spectacularly. PTSD, suicides and other ailments were pay-offs for killing with abandon and bombing marriage parties. The agony continues in its many forms.

Is Afghanistan truly democratic today? Is it at peace after 49 countries tried to do so through the might of NATO and US military machines? Are Afghan women any freer? Is the country an oasis of stability in an otherwise chaotic neighbourhood? If the answer to these questions is no — which it is — then why should the Taliban not be given the power that was snatched from them through the barrel of the gun? And why would they talk to the sell-out Mir Jaffars and Mir Sadiqs amongst them, who amassed fortunes over the dead bodies of their compatriots including women and children. Let’s get our bearings right and read the not-too-distant Afghan history. Donald Trump — the deal-maker — has understood this and if Ashraf Ghani and his cabal do not get it, they would do so at their own peril. Najeebullah was on the gallows in pock-marked Kabul. It is about time the Taliban get what they deserve and they be taken on their word. The New York Times op-ed by Sirajuddin Haqqani is their stated road map.

The Afghan Taliban fought courageously, persistently and with steadfast conviction to eject the US and the allied forces from their homeland, fighting a glorious war of liberation by any definition. The history of this war is written by their blood and sweat. Their right to fight for liberation was an inalienable right granted to them by all civilised conventions. Expecting them to surrender the fruits of their hard-won freedom on a platter to those Afghans who worked against them in collusion with the invading forces is unjust, foolish and unrealistic.

What could not be done through the military might of the whole industrialised world should now be tried through a just and realistic power-sharing, which is the main contention begging resolution through the intra-Afghan dialogue. With the Americans cutting loose in an election year, Abdullah Abdullah announcing his parallel government, Afghan donor countries taking a hit due to the coronavirus, the Afghan security forces in two, rather three minds; the present Afghan government can never ever provide peace and stability that every Afghan yearns for, let alone stand up to the Taliban juggernaut.

When you renege on commitment by refusing to release prisoners in a deal signed by your banker, you do not help your country and your people — you, in fact, use prisoners as a human shield in a pathetic and fearful show of leverage. If the sentiment of the Taliban rank and file and post-Soviet Afghan history are any guide, the regime must make peace at whatever cost while the US is still there. With US troops gone, the regime would lose that leverage. Najeebullah was kept on the ventilator by erstwhile USSR for two years; the Ghani-Abdullah dichotomy would fall like a house of cards against the dual Taliban-ISIS threat, as assessed recently by the US government. In times of nervous disease-fighting and profound uncertainty, the Afghan regime should not expect any support — financial or military. A compromise with the Taliban, the ascendant force is writing on the wall, as the alternative may soon be a surrender.

The Afghan Constitution, women rights, madar-pidar azadi, etc are all ethos of a minuscule urban elite in a country where the first and foremost priority should be peace and safety of life across the board. As argued in this space previously, the Taliban would need continuous financial aid to run the government, hence the leverage with the world. But expecting them to agree to a lopsided power-sharing arrangement — that the Afghan government aims at — would be as futile as fighting them for two decades.

The US, China, Russia and Pakistan understand that the Taliban can provide governance, stability and subdue ISIS. The Afghan government needs to understand this too. In these times of coronavirus pandemic, all sides need to take a reality check with peace as the centerpiece.