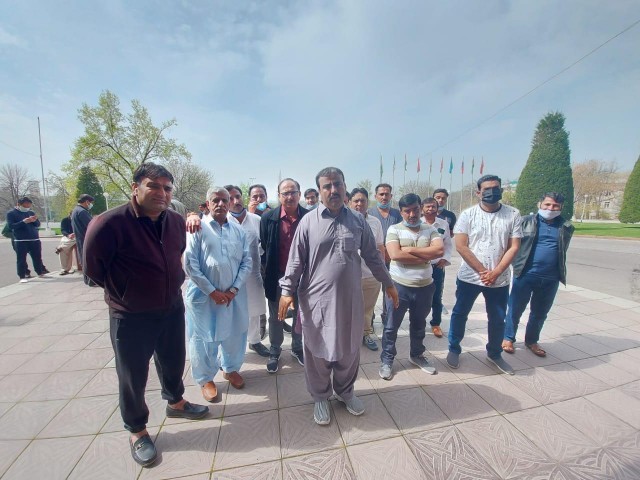 The stranded citizens complain they have no money left to support themselves indefinitely. PHOTO: EXPRESS

KARACHI: More than a hundred Pakistani nationals are currently stuck in Tashkent, Uzbekistan in the wake of international travel restrictions imposed by the government to prevent the spread of COVID-19.

As the provinces scramble to contain the potentially deadly contagion by imposing further measures to limit freedom of movement, the stranded Pakistanis are worried that they may be completely forgotten by the authorities.

Among those stuck in the Central Asian nation is a group of 48 businessmen who had arrived for just a five-day visit.

“All of us are associated with the pesticide business. We came here on March 14 and were supposed to fly back via FlyDubai on March 20. But when we reached the airport, we learnt all flights to Pakistan had been cancelled due to a travel ban,” Lal Chand, who hails from Jamshoro, said in a video message that has gone viral online. “Now, we are stuck here without support. We have spent all the money we brought and have run pillar to post to try to return home, but no one in the Pakistani embassy is listening to us,” he complained.

According to other members of the delegation their trip was arranged by a pesticide company called ‘Sun Craft’ because they had been selling its products really well. “The company is refusing to cover any expenses now and we don’t know how else to arrange money to stay here,” one member said.

“My family is left without me in Pakistan to face this coronavirus crisis. They are worried about my health and I am worried about their health. I have no clean clothes, no money and they are telling me the virus has spread here as well,” said Nadeem Javed, who hails from Pakpattan. “We appeal to the prime minister and the foreign ministry to help us return home. It is not just our delegation that’s stuck here. There are other Pakistani tourists too. In total, we are 104.”

Speaking to The Express Tribune, a Sun Craft associate in Pakistan Waqar Shamsi said his company would be willing to bear the stranded delegation’s expenses but it is not clear how long they will have to stay in Uzbekistan.

“Delegations from other countries like India, Thailand and Malaysia have been repatriated. Only the Pakistanis are stranded,” he said, adding that his company is in touch with the foreign ministry to work out how to bring them back and the stranded delegation was being housed in Uzbekistan Hotel.