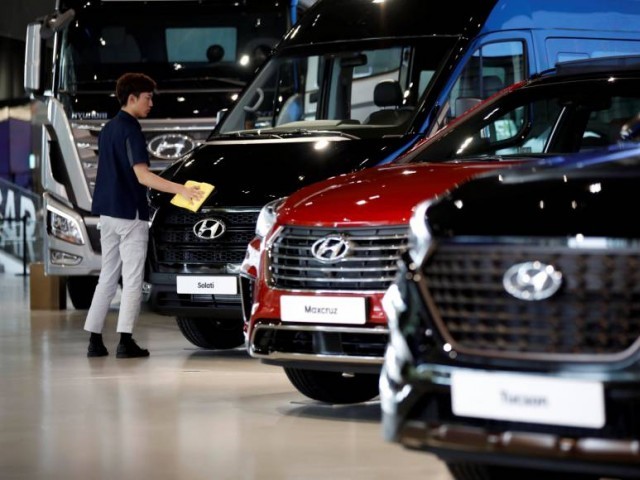 KARACHI: The automobile sector of Pakistan, which has already been on a downward trajectory since the beginning of current fiscal year, has received an additional shock from the coronavirus outbreak and is now on the brink of collapse.

Following the directives given by the government to stop the spread of coronavirus, a majority of automobile manufacturing plants have halted production and have remained closed since March 23, 2020. The plants that have stopped production include Indus Motor, Honda Atlas Cars, Atlas Honda, Yamaha, Pak Suzuki Motor Company, Dysin Automobiles, Millat Tractors and Hinopak Motors.

Speaking to The Express Tribune, Pak Suzuki Motor spokesperson Shafiq Ahmed Shaikh pointed out that the auto industry, which was already in a crisis, would receive a huge blow due to plant closures and suffer further losses.

Earlier, in the first eight months (Jul-Feb) of current fiscal year, automobile sales dived 44% to 90,834 units compared to 162,240 units in the same period of previous fiscal year. On the other hand, sales of trucks, motorcycles, jeeps and pickups also fell in the period under review.

“More than a million people are directly and indirectly employed in the automobile sector, hence, we request the government to draw up a separate bailout plan for this sector,” Shaikh said.

He suggested that under the package, the government could eliminate the turnover tax for the ongoing year and slash utility bills to half from February to August 2020.

He also requested the government to cut import duty to 10% on completely knocked-down (CKD) units for February to December 2020. Apart from this, sales tax should be slashed by 50% for the same period.

“We also propose a reduction of 75% in withholding and income taxes applicable to manufacturers, authorised dealers and showrooms from February to December 2020,” the spokesperson said.

His comments came as Prime Minister Imran Khan, under the economic package designed to combat the COVID-19 outbreak, slashed prices of petrol, diesel and kerosene by Rs15 per litre.

“The present situation is like a natural disaster, which has added to the woes of auto sector,” said JS Research analyst Ahmed Lakhani. He, however, added that the reduction in petroleum prices would have a positive impact on the auto sector.

The State Bank of Pakistan (SBP) on Tuesday evening also reduced the key policy rate by 150 basis points to 11%, which is expected to support the auto industry but growing uncertainty makes it difficult to predict the outcome.

“Despite going through difficult times, the sector has not laid off its direct employees although jobs of vendors (indirect employees) have been lost in large numbers,” he said. “It is unclear how the industry players will react during these times.” The analyst cautioned that axing jobs would have an adverse impact on the image of the entire industry.

Prior to the outbreak of coronavirus, the rupee devaluation was the main reason behind the deteriorating situation of the auto sector as it turned auto parts and raw material expensive, thus raising the cost of production of carmakers. Initially, the companies bore the additional cost, however, later they passed it on to customers, which severely impacted their sales.

In addition to that, a steep interest rate hike had also gravely impacted the automobile sector as car leasing became costlier, which discouraged people from purchasing vehicles.