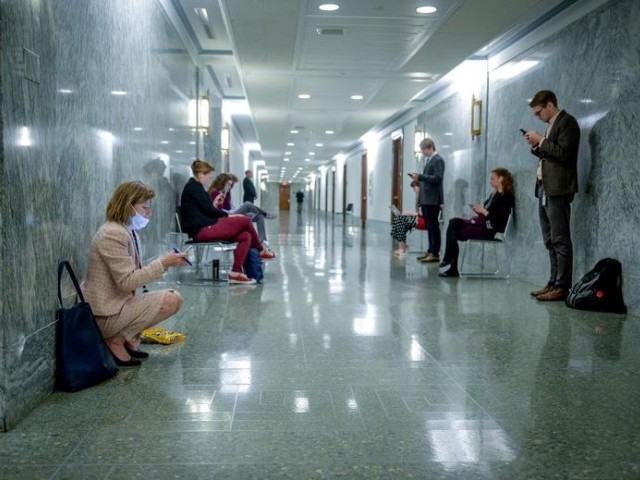 HONG KONG: Evidence of the devastation wreaked on the global economy by the coronavirus pandemic mounted on Tuesday as activity surveys for March from Australia and Japan showed record falls, with surveys in Europe and the United States expected to be just as dire.

Entire regions have been placed on lockdown and in some places soldiers are patrolling the streets to keep consumers and workers indoors, halting services and production and breaking down global supply chains.

Mirroring the emptying of supermarket shelves around the world, indebted corporates have rushed into money markets to hoard dollars, with a global shortage of greenback funding threatening to cripple firms from airlines to retailers.

“The coronavirus outbreak represents a major external shock to the macro outlook, akin to a large-scale natural disaster,” analysts at BlackRock Investment Institute said in a note.

Purchasing Managers’ Index (PMI) surveys from Japan showed the services sector shrinking at its fastest pace on record this month and factory activity contracting at its quickest in a decade.

Services PMI slumped to a seasonally adjusted 32.7 from February’s 46.8 and manufacturing PMI fell to 44.8 from a final 47.8 last month. The 50 mark separates growth from contraction.

The survey results were consistent with a 4% contraction in the economy in 2020, Capital Economics senior economist Marcel Theliant said. In Australia, the CBA Services PMI fell to a record low of 39.8 as restaurants, cafes and tourism were hit hard by travel bans and cancellations of events and concerts.

A separate analysis of card spending data by Commonwealth Bank of Australia showed shopping outside of grocery, alcohol and healthcare was bleak.

US could be next ‘virus epicentre’ as India locks down, global recession looms