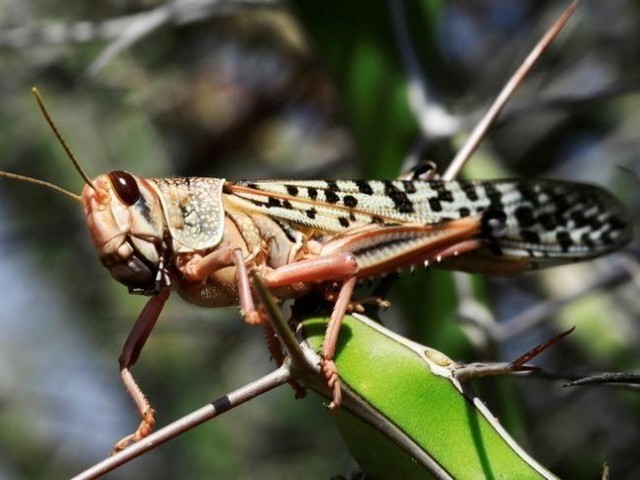 ISLAMABAD: The rural community of Depalpur, Okara, mostly poor peasants, is still waiting for the return of poultry meal producers to continue buying locusts for cash.

Having 76% protein, the locusts offer a huge potential for making nutritionally rich and reasonably cheap animal meals. Locusts were a good omen for the poor rural community as each household earned thousands of rupees overnight during the community-based locust harvesting last month.

Catching locusts is considered a challenge by many professionals but in fact it is the easiest thing to do once you know the locust behaviour. Adult locusts assemble in groups on trees, open ground and areas without any dense vegetation with sunset. They stay there almost movement-less till sunrise the next day.

Catching locusts was so easy that the rural community netted tonnes of locusts in a single night. After knowing the locust behaviour, the community was informed and motivated for easy catching.

During the three-day trial period, the community response was overwhelming as they collected over 20 tonnes of locusts, which were transported to the nearby poultry feed mills. This big locust catch has opened new ways of rethinking the locust management policy and plans.

A highly innovative and purely indigenous method of locust control involving the local community was tested in the Pepli Pahar Forest in Depalpur, Okara District, Punjab where huge swarms of adult locusts were reported in mid-February 2020. A team of experts including entomologists and those from agricultural, natural resources, nutritional and revenue fields was constituted before initiating field work. The idea was to catch the locusts in return for money and the slogan of “Catch locust, earn money and save crop” was chanted during the community mobilisation drive. A price of Rs20 per kg was fixed for the locusts.

After undertaking various nutrition-related tests and analysis, locusts are being used as an ingredient of the poultry, cattle, fish and pet meal. Animal nutrition departments and private nutrition enterprises were involved in buying the locusts on the spot in return for cash. An analysis of the locust-based meal indicated over 70% protein, 44% dry matter, plenty of amino acids and other useful ingredients for animal feed. A high concentration of protein indicates its usefulness for animal feed that can easily replace the imported soybean.

The rural community has earned a handsome amount for the catch and they are very happy. This is an ideal situation for the community in the form of cash for locusts, protection of their crops from insect attacks, reduction in import of soybean for poultry meal and protection of local community and environment from the bad impact of chemical spray.

In this way, the poor rural communities get empowered that can help them ensure food security.

Community-based locust management can greatly help in reducing the use of chemicals for locust control and, therefore, facilitate the enforcement of these chemical conventions in Pakistan.

Locusts are being used for making various animal meals at the National Agriculture Research Council, Islamabad.

Similarly, the private sector animal meal making giant, Hi-Tech Feeds, has also initiated testing locust meal on chicks and intends to move its field dryers of high capacity for locust drying as a source of poultry meal. This will greatly help in reducing the import of soybean as a major source of protein. This way, Pakistan can save foreign exchange and use locusts for animal meal production.

Locusts are now a resource rather than a challenge. Community-based locust management can, therefore, help Pakistan control locust attacks, protect life on earth from the lethal effects of chemical spray, provide income to the rural community, provide an important ingredient for poultry and animal meals, replace imported soybean with indigenously collected locusts as a source of protein, save precious foreign exchange and undertake new research on locust behaviour, its nutritional value and enterprise development.

With a view to encouraging the local community to catch locusts for cash and involve the private animal feed industry, the following is proposed:

Cheap gas and the fertiliser sector