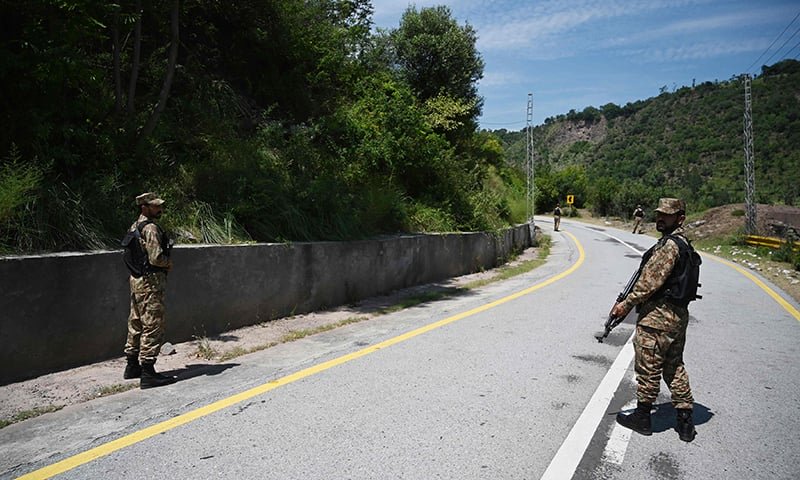 QUETTA / LAHORE: After Sindh, the governments in Balochistan and Punjab also requested deployment of the armed forces in wake of a surge in novel coronavirus cases across the country.

The move comes as Pakistan confirmed fourth death due to the coronavirus on Sunday. The country’s tally of confirmed cases stands at 646 with 292 in Sindh, 152 in Punjab, 104 in Balochistan, 55 in Gilgit-Baltistan, 11 in Islamabad and one in Azad Jammu and Kashmir.

Speaking at a news conference on Sunday, Punjab Chief Minister Usman Buzdar said the army’s help was needed to ensure lockdown in the province.

The development came a day after the Punjab government announced a lockdown in the province from Saturday night to Tuesday morning. All parks, markets, shopping malls and restaurants will remain closed from 9:00pm on Saturday to 9:00am on Tuesday, except general stores, meat and chicken shops, fuel stations, pharmacies, bakeries, tandoors, fruit and vegetable shops.

Similarly, a letter issued by the Balochistan government stated that it required military in aid of civil power under Article 245 of the Constitution read with the Section 131 (A) of the Code of Criminal Procedure (CrPc).

It further added, “It is therefore requested to please accord approval for deployment of Pak-Army troops … to cope with COVID-19 related issues and for maintenance of law & order situation in the Province.”

Balochistan’s tally for the COVID-19 cases stands at 104 early Sunday with majority of them pilgrims who returned from Iran. 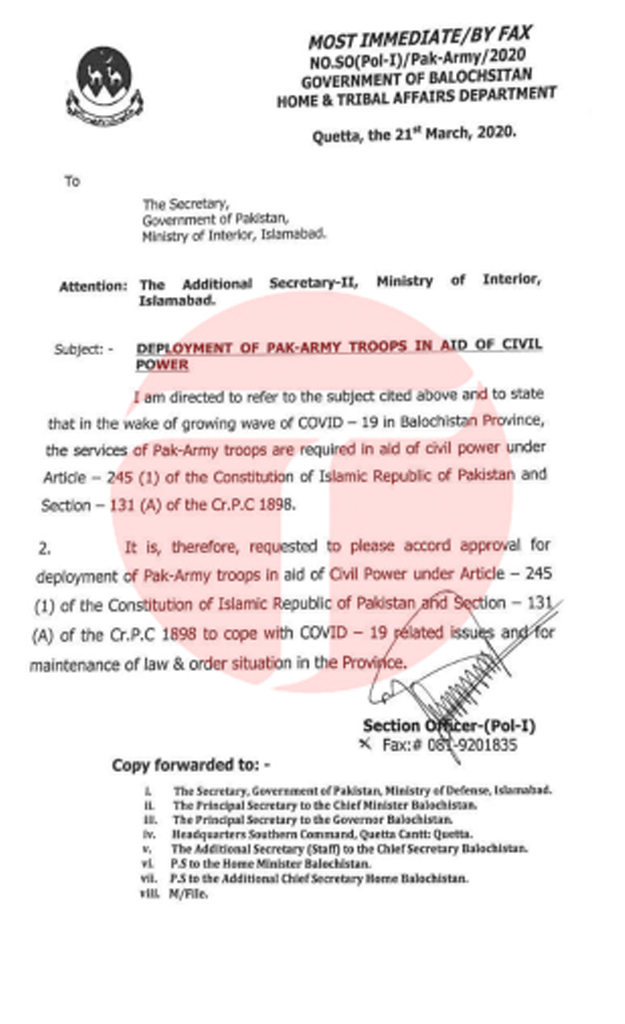 The move comes as the country braces for another batch of pilgrims from Iran at the Taftan border crossing. “At present, there are 500 people in Taftan, while another 1,000 are expected to come from Iran,” said Balochistan Chief Secretary Captain (retd) Fazeel Asghar.

“Work on the establishment of an emergency health city on 50 acres has been started which can accommodate 2,000 people. NDMA is providing 600 containers for Taftan and 300 containers for Chaman, which will be equipped with all facilities.”

A notification issued by the Home and Tribal Affairs department said the government made the decision in the best interest of the public “in pursuance of the decisions made in the first meeting of the Core Committee for COVID-19 [novel coronavirus].”

Article 245of the Constitution:Functions of Armed Forces

1[(1)] The Armed Forces shall, under the directions of the Federal Government, defend Pakistan against external aggression or threat of war, and, subject to law, act in aid of civil power when called upon to do so.

(2) The validity of any direction issued by the Federal Government under clause (1), shall not be called in question in any Court.

(3) A High Court shall not exercise any jurisdiction under Article 199 in relation to any area in which the Armed Forced of Pakistan are, for the time being, acting in aid of civil power in pursuance of Article 245:

Provided that this clause shall not be deemed to affect the jurisdiction of the High Court in respect of any proceeding pending immediately before the day on which the Armed Forces start acting in aid of civil power.

(4) Any proceeding in relation to an area referred to inclause (3) instituted on or after the day the Armed Forces start acting in aid of civil power and pending in any High Court shall remain suspended for the period during which the Armed Forces are so acting.]

Section 131(A) of the CrPc: Power to use military force for public security and maintenance of law and order

(2) Every such officer shall obey such requisition or direction, as the case may be, and in doing so may use such force as the circumstances may require.

(3) In rendering assistance relating to exercise of powers specified in sub-section (1), every officer shall, as far as may be, follow the restrictions and conditions laid down in the Code.