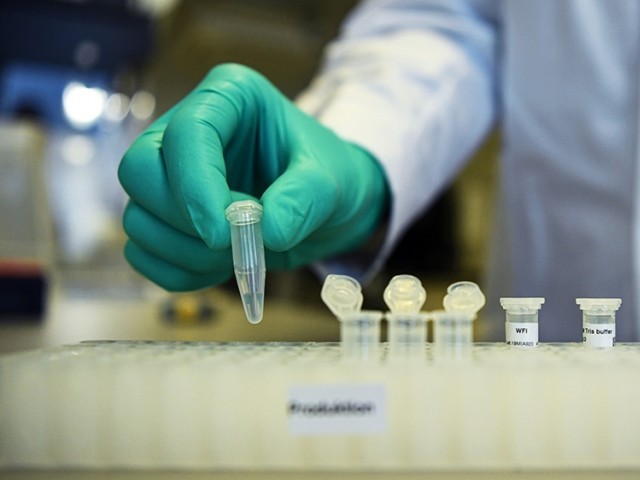 KARACHI: While scientists across the globe race to develop drugs and vaccines to combat the COVID-19 outbreak that has infected over 275,000 people in at least 177 countries, killing more than 11,000 patients, biologists in Karachi were sent packing after the Sindh government announced the closure of all educational institutions across the province.

As part of this, the International Centre for Chemical and Biological Sciences (ICCBS) – a world-renowned scientific research institute located in the University of Karachi – was also temporarily shut down, due to which the ongoing research on medicines for the novel coronavirus had to be suspended.

The drug preparation process was started in early March, with experiments being conducted at the Dr Panjwani Centre for Molecular Medicine and Drug Research, a subsidiary of the ICCBS.

Pakistani scientists involved in the preparation of the medicine reportedly made a breakthrough during the initial stages of the research as they identified nine compounds which could be effective in inhibiting the growth of the virus in the host cell. The research was being carried out by Dr Atia-tul-Wahab and her team under the supervision of the ICCBS director, Dr Iqbal Choudhary.

Per sources, even though the university was initially closed upon the orders of the government, scientists at the ICCBS continued their activities in the labs as their research was making progress. However, complaints began to surface on social media regarding the non-closure of the research centre, after which authorities ordered the centre to halt all research-related activities and sent the researchers home.

Speaking to The Express Tribune, Dr Choudhary confirmed that all research, including experiments for the preparation of coronavirus vaccine, had been stalled.

“Some teachers secretly made a video of scientists entering and leaving the institute despite a lockdown,” he said. “Subsequently, they uploaded the video on social media, giving the impression that scientists were violating the government’s orders. Under such circumstances, it became very difficult for us to carry on with the experiments and administer the institute, because of which we were compelled to suspend all research activities.”

It is worth noting that unlike in Pakistan, research activities for the preparation of coronavirus medicine and vaccine in the two countries most affected by the outbreak were not halted for a single day, even when there was a complete lockdown.

Even though it was disappointing for ICCBS scientists to suspend their research activities just when their efforts started to bear fruit, they are primed to resume the task at hand as soon as possible.

“During the initial stage of our research, we examined a sample of COVID-19 through computer simulation,” Dr Atia-tul-Wahab revealed. “Through this process, nine compounds have been identified that can inhibit or break the host cell of the coronavirus.”

She explained that one of the compounds turned out to be very effective in inhibiting the replication of the virus, and was considered as the lead molecule in the preparation of a potential preventative vaccine.

Meanwhile, Dr Choudhary said that once the university is allowed to reopen, the centre will immediately restart its research activities.

“The virus is not a living thing, but when it enters the human body, it multiplies by possessing the host cell and causes infections,” he explained. “Our scientists are working to inhibit the function of the protein of the virus so that cell replication can be halted in the host cell.”

Dr Choudhary added that scientists were working on identifying the protein of the virus. Once identified, the virus would be cloned to study its intracellular replication rates.

“After carrying out other necessary scientific steps, clinical trials will begin and the created vaccine will first be tested on animals and later on humans,” he said. “We are hoping for the best.”