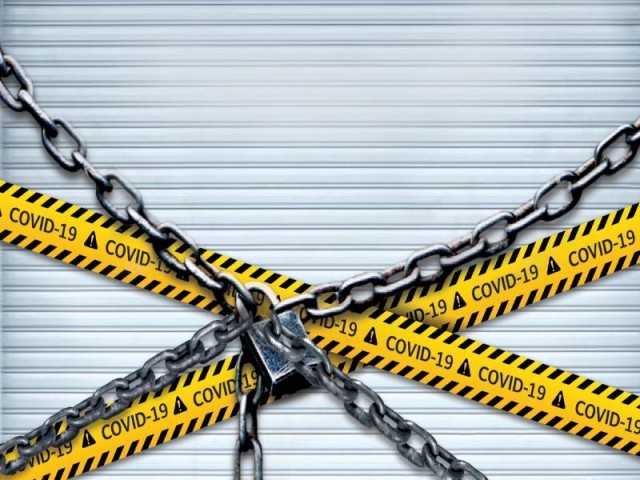 KARACHI: More people are feared to fall prey to economic hardships than the coronavirus outbreak as a partial lockdown throughout Pakistan, aimed at containing the spreading disease, is set to deal a blow to large, medium and small-scale businesses as well as daily-wage earners.

According to orders given by the federal and provincial governments, many offices have been shut down partially while shopping malls, parks, picnic spots, restaurants and marriage halls have been closed completely.

In addition to these, inter-city bus and some air services have also been suspended while markets and shops have been ordered to stay closed with the exception of grocery stores and pharmacies.

“Hundreds of thousands of people are feared to lose jobs in the aftermath of the virus,” said economist Dr Ashfaque Hasan Khan while talking to The Express Tribune. “Daily-wage earners will be the worst hit.”

According to a local media outlet, former finance minister Dr Hafiz Pasha estimated that around 2.6 million people may become jobless in the country over the next 18 months.

Globally, lockdowns have become the most effective strategy to overcome the pandemic. This, on the other hand, has caused a plunge in prices of commodities and has sent shockwaves through different economies. Pakistan is also facing a similar situation.

It reported the first two deaths from the virus on Wednesday. Another patient died on Friday. Total number of infected cases has crossed 600.

“Difficult times are ahead not only for Pakistan, but also for the global economy. There are shutdowns everywhere,” Khan said.

Estimates suggest the US would lose three million jobs by mid-summer in 2020, including one million in March alone. The trend in Europe and other parts of the world will be similar.

“We cannot remain immune from what is happening around us,” Khan remarked. He added that the government had not played its role properly as reflected by a meagre reduction of 75 basis points in the benchmark interest rate to 12.5% earlier this week.

“This is a joke with the nation. This is simply ignorance about what is happening on the ground. It shows non-seriousness of the government in an emergency situation,” he said.

“I expected a cut of 300 basis points in the backdrop of a massive reduction in prices of crude oil and other commodities in the international market.”

Pakistan Business Council termed the interest rate cut “too little and too late”.

Pakistan’s economy has already been in a depressed state prior to the coronavirus outbreak due to what the government calls stabilisation policies like high interest rate (12.5%), massive rupee devaluation (over 50% since December 2017) and hefty increase in utility prices like power and gas.

“All such things increased the cost of production…and resulted in de-industrialisation in Pakistan,” Khan said. “Pakistan’s economic growth will slow down further to around 2.5-2.7% in current fiscal year 2019-20.”

He pointed out that small businesses would be severely affected by the virus, adding “all these developments will badly impact employment numbers”.

The closure of markets is set to push down industrial output and impact employees the most. The entire supply chain will be disrupted. Imports and exports are set to shrink. The drop in transportation service is likely to render many drivers, including those running cabs and rickshaws, jobless.

Karachi Chamber of Commerce and Industry (KCCI)’s former president Anjum Nisar pointed out that before the outbreak of the virus, it was mostly the textile industry that was performing well.

“This industry has now joined the other ill-performing sectors such as automobile, steel and cement,” he said.

Pakistan received a higher number of textile export orders following the lockdown in China. “Now, the export orders are being delayed as Pakistan’s major trade partners including the US and European nations – such as Germany, Italy, France and the UK – are lying partially or completely closed.”

Small and medium enterprises (SMEs), which had a significant share in the national production and exports, had been the worst hit, he said.

“Pakistan’s exports are estimated to shrink by an additional $500-700 million in the current month,” he said. “Such adverse conditions, if prolonged, will severely dent employment numbers.” The government needs to take drastic measures immediately to protect employment of people and safeguard industries. “Increased joblessness may impact people’s health as well,” he said.

The government needed to increase allocation under its Ehsaas welfare programme to protect and support the most vulnerable during these tough times, he suggested.

Khan was of the view that the government should immediately slash the interest rate to 10% to safeguard and give a boost to businesses.

“Secondly, electricity and gas prices should be frozen at current levels and a government fund should be established for the SME sector,” he recommended. “The fund can be set up with the assistance of World Bank and Asian Development Bank.”

He pointed out that dollar inflows into the country would drop due to an expected decline in exports and workers’ remittances while imports were also likely to slow down.

“The net impact of all negative and positive developments will be in favour of Pakistan. This will lead to an additional decrease of $500 million in the current account deficit to less than $4 billion in FY20,” he said.