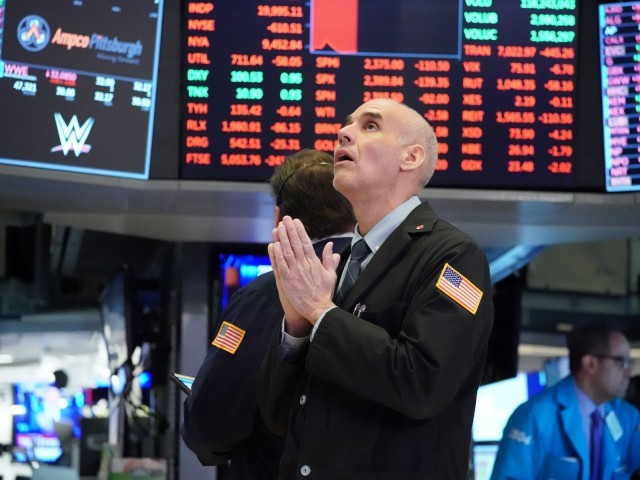 HONG KONG: Equities enjoyed some much-needed gains on Friday after another volatile week on global markets as investors took solace in a blockbuster series of government and central bank measures aimed at cushioning the economic blow from the coronavirus.

The dollar eased somewhat after a lengthy rally fuelled by traders cashing out of their investments, while the embattled oil market extended Thursday’s gains.

With the deadly pandemic showing no sign of ending, countries are going into lockdown, effectively shutting down the global economy and leaving experts in the dark as to how deep and long an expected recession will last.

On Thursday, US Senate Majority Leader Mitch McConnell presented a $1 trillion emergency relief package to combat the turmoil, with $1,200 cash hand-outs for individuals.

It also includes $208 billion in loans for companies hit by the crisis – $58 billion of it for the battered airline sector – and $300 billion in small business loans.

The plan is the latest in a series of measures put forward by Washington and comes on top of Federal Reserve interest rate cuts and pledges worth hundreds of billions of dollars to provide liquidity to creaking financial markets.

It also comes in tandem with similar moves by governments and banks around the world, which have provided some support to investors, but which many observers warn could still be too little as the crisis rumbles on.

Hong Kong, Mumbai and Kuala Lumpur all surged more than 5%, Seoul and Mumbai piled on more than 7%, while Taipei rallied more than 6%.

Manila rose 3.4%, while Shanghai, Singapore, and Jakarta put on more than 1%, with Wellington 1% higher and Sydney up 0.7%. Tokyo was closed for a holiday.

In early trade, London and Paris both climbed more than 5% while Frankfurt was up more than 6%.

“For now… the artillery barrage from the world’s central banks and government treasuries seems to have stopped the rot sweeping the global economy,” said OANDA’s Jeffrey Halley.

The advances followed a positive lead from Wall Street and Europe.

But, while healthy, the advances come at the end of another tumultuous week for equities and there are warnings of further troubles down the line.

Many analysts expect markets to remain highly volatile and under pressure, until health authorities get a better grasp of the scale of the outbreak in the United States and Europe and how long it will curtail activity.