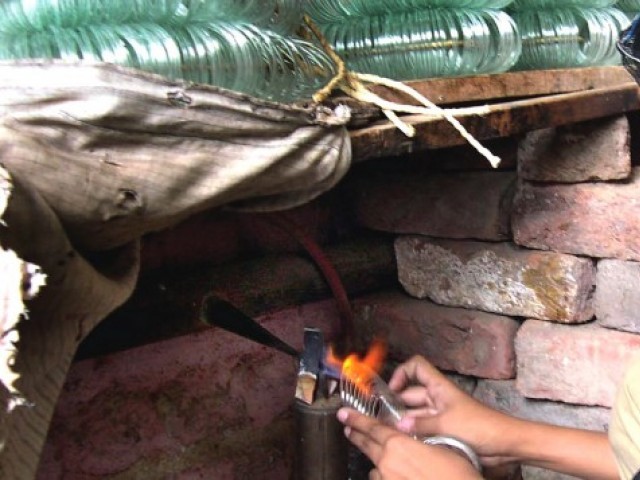 Reports say that some workers in the glass bangle making industry can be as young as seven years old. PHOTOS: SHAHID ALI/EXPRESS

Speakers at a seminar urged the government to start a long-term agriculture rehabilitation programme in flood-affected areas and ensure provision of livestock, poultry, seed and fertilisers to small farmers.

They said that short-term relief measures may help them deal with the tragic post-floods situation, but they require consistent and long-term efforts on the part of the government, civil society, and the people themselves to replenish food, agriculture and livelihood resources. The seminar on “Rebuilding Lives Post-2010 flood” was held here on Tuesday.

Participants of the forum demanded the government to address their “unending woes”, particularly those of women and small farmers by distributing land and Watan cards.

Speaking on the occasion, Jemal Ahmed, Country Director ActionAid Pakistan, said that 2010 floods had a serious impact on the people.

The speakers were of the opinion that women from affected areas had not recuperated after the floods. They lamented that women were not included in the government’s relief, rehabilitation and reconstruction packages.

“Majority of women were not entitled to receive Watan Cards, and they were not allowed to visit food distribution centres because firstly, no separate food points for women were set up, and secondly their family’s elders did not let women to leave the camps,’’ one speaker said.

Touqeer Fatima Bhutto, Sindh Minister for Women Affairs, admitted that women were not prioritised in the government’s flood response mechanism, particularly in the case of Watan Cards.

She appreciated the female farmers’ participation in the forum; she said that women played a vital role despite facing many problems in flood-affected areas.

Rakhshanda Perveen, representing United Nations Development Fund for Women, suggested that women should be awarded equal representation in all departments of life.

“Women should not be stereotyped for some specific professions like education and health rather they should be given equal share of jobs in all government institutions,” she said.