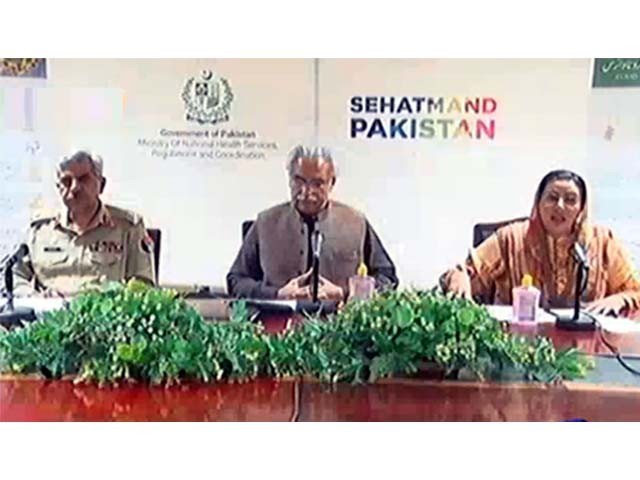 ISLAMABAD: The armed forces are assisting the civil administration in combatting the coronavirus and have taken necessary action to implement the decisions of the National Security Committee (NSC) last week, Major General Babar Iftikhar, the director general of the Inter-Services Public Relations (ISPR) said on Thursday.

Speaking at a joint press conference with Special Assistant to Prime Minister on Information Firdous Ashiq Awan and State Minister for Health Dr Zafar Mirza, he said that scientists under the supervision of the army were busy researching and manufacturing the protection equipment.

“Chief of Army Staff General Qamar Javed Bajwa has instructed all the formations of the Pakistan Army to reach out to the civil administration at district and tehsil levels in their respective domains to handle the coronavirus crisis,” he told the presser.

“The armed forces are utilising all resources to cooperate with the local administration to counter the pandemic,” he said. “The armed forces are in action from the day one for implementing the decisions made by the National Security Committee and directives issued by Prime Minister Imran Khan.”

Maj-Gen Iftikhar revealed that scientists under the supervision of the Pakistan army were busy researching and manufacturing personal protection equipment, such as facemasks and hand sanitisers.

In addition, the chief military spokesman continued, a “medical plan of action” had been compiled under the supervision of the surgeon general of the Pakistan army to support the efforts to fight against the disease.

“Also, all medical facilities of the armed forces have been geared up, and measures are being taken to make them available for extreme emergency situation,” he said, adding that only elective surgeries were being performed at these institution so that these could be used during emergencies.

The armed forces were also assisting the civil administrations with the security and management of various quarantine camps set up across the country, the ISPR director general told reporters.

At the presser, Maj-Gen Iftikhar and Dr Mirza as well as Dr Firdous stressed the need for quashing fake news about the coronavirus. “Timely and accurate flow of information is the key to avoid panic, rumours and fake news,” Iftikhar said.

“Mapping population demographics and keeping them informed is the key to ensure calm, he said, adding that people in all the four groups – individual, family, community and society – have to play their part, both individually and collectively, to face the coronavirus challenge.

While sharing statistics, he said that 67% population of the country lived in the villages and 81% used mobiles. “Reaching the targeted audience through appropriate mediums of communication is crucial to controlling the spread of coronavirus,” the military spokesperson stressed.

“Unified sources of information are necessary to deal with any emergency situation… and only through effective means of communication the rumours can be dispelled.”

He emphasised that coronavirus could still be controlled in Pakistan through social distancing. He urged people to visit hospitals alone if they were sick. “There is no need to be obsessive about the number of coronavirus cases,” he said.

Dr Mirza told reporters that one of the outcomes of President Arif Alvi’s recent visit to China was the far-reaching discussions between Pakistani and Chinese experts in health sector.

Dr Firdous Ashiq Awan said that a committee had been constituted under the chairmanship of Prime Minister’s Adviser on Finance Dr Hafeez Shaikh to devise a plan to avoid economic slowdown because of the coronavirus in the country.

The committee, she added, will work on the National Economic Policy and present the plan to the prime minister soon for final approval, adding that the government was working on a financial stimulus package to help labourers and daily wage earners to mitigate the impact of coronavirus.

She warned against hoarding of food and other products, saying that strict action would be taken against all those involved in creating artificial crisis. She said that there was no shortage of food or items of essential use in Pakistan.

“PM Imran Khan is fully aware of the current situation and monitoring the developments across the country,” Firdous said, adding that protection of people’s life, assets and health was the first and foremost priority of the government.

“Prime Minister Imran considers it the most important responsibility for himself,” she said. “The purpose of the PM’s visit to the quarantine camps on March 18 was to give a clear message to the masses that he was personally supervising the arrangements made to counter the disease.

Firdous said the federal and provincial governments and all institutions were working in complete harmony to discharge their duties.