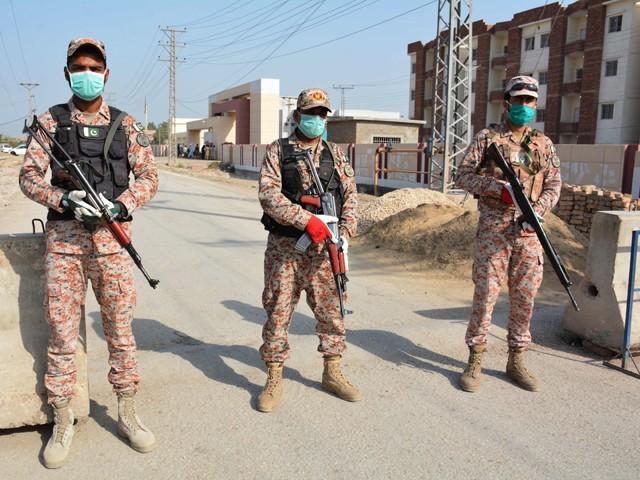 Soldiers wearing facemasks stand guard on road leading to a quarantine faciltity (R) for people returning from Iran via the Pakistan-Iran border town of Taftan to prevent the spread the COVID-19 coronavirus, in Sukkur in southern Sindh province on March 17, 2020. PHOTO: AFP

“… [We] have received news of one new positive case of #coronavirus in Abbottabad. The gentleman has come to Pakistan from the UK. This takes K-P total cases to 16. He has been home quarantined since he displayed no symptoms,” he wrote on his official Twitter handle.

In the spirit of continued transparency, have received news of one new positive case of #coronavirus in Abbottabad. The gentleman has came to Pakistan from UK. This takes KP total cases to 16. He has been home quarantined since he displayed no symptoms.#coronavirusinpakistan

“On the basis of test reports, of suspected patients, I can confirm that the number of confirmed #coronavirus patients is now 26,” he wrote.

“We are testing all the suspected patients and 736 Zaireen (pilgrims) quarantined in DG Khan. 1,276 Zaireen coming from Taftan will also be quarantined,” he added.

On the basis of test reports, of suspected patients, I can confirm that the number of confirmed #coronavirus patients is now 26.

We are testing all the suspected patients and 736 Zaireen quarantined in DG Khan. 1,276 Zaireen coming from Taftan will also be quarantined.

Balochistan government spokesperson Liaquat Shahwani, meanwhile, confirmed six new cases in the provinces, raising its tally to 16. “Patients are being treated in isolation ward of Sheikh Khalifah Bin Zayyad Hospital [in Quetta],” he was quoted as saying.

Overall, Sindh has 172 confirmed cases while Khyber-Pakhtunkhwa has 16, Balochistan has 16, Islamabad four, Gilgit-Baltistan three, Punjab 26 and Azad Jammu and Kashmir has reported none till now.

The situational report provided by the National Institute of Health early Tuesday claimed the country’s tally at 187 with 150 confirmed cases in Sindh, 15 in K-P, 14 in Balochistan, four in Islamabad, three in G-B and one in Punjab.

There were a total of 499 COVID-19 tests performed across the country during the last 24 hours.

Four patients have been discharged after recovering – one in Islamabad and three in Sindh. However, the Sindh Health Department puts the tally at two.

According to NIH, a total of 995,821 travellers have been screened at entry points so far out of which 20,187 travelers were checked in the 24 hours.

The total number of suspected patients in the country stands at 533, with around 100 being added to the number during the last 24 hours.

The varying stats paint a dismissal picture of coordination between the federal and provincial governments. The Sindh government has come out criticising Centre for lack of foresight in quarantine arrangements in Taftan where over 9,000 pilgrims returning from Iran had been quarantined by the Balochistan government in a ‘tent city’.

Sindh Minister Saeed Ghani said the quarantine facilities in Taftan on the Iranian border were inadequate, which resulted in large numbers of coronavirus cases.

After completing the 14-day incubation period, the pilgrims were allowed to travel back to their cities. However, Sindh and K-P sent the pilgrims to isolation facilities in Sukkur and Dera Ismail Khan and tested them before allowing further travel. So far 119 pilgrims tested positive in Sindh and another 15 in K-P.

In Quetta, Balochistan Chief Minister Jam Kamal defended the efforts of the provincial government to contain the coronavirus spread. In a tweet, the chief minister invited his counterparts from other provinces to visit the facilities at the border points and elsewhere in the province.

“Not only we are doing in Taftan… But Rideeq, Quetta, rest districts and now this new facility on Pak Afghan border with Army/FC,” he tweeted. “I invite all CMs, federal authorities and electronic media to come Quetta, see Taftan, Jivani Turbat and Chaman border with me…”

On March 13, Prime Minister Imran Khan chaired a meeting of the National Security Committee (NSC) to cobble a unified approach to contain the outbreak.

The Pakistan Day parade on March 23 has also been cancelled.

In Khyber-Pakhtunkhwa, the education institutions have been closed till April 5 and suspended wedding activities around the province.

Follow our live coverage of the Covid-19 outbreak in Pakistan and the around the globe here.