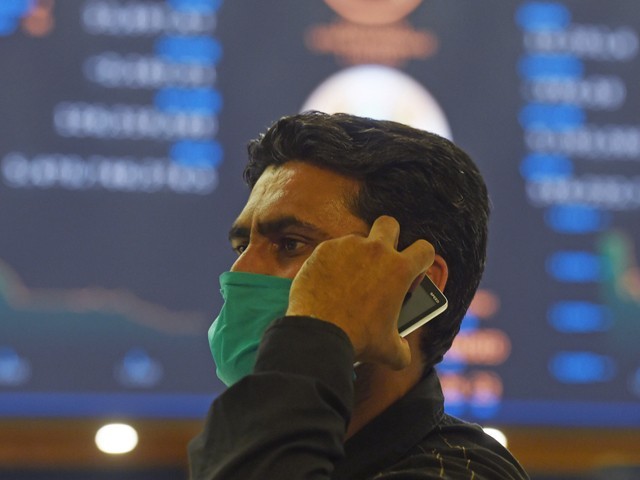 A stockbroker wearing a facemask amid concerns over the spread of the COVID-19 novel coronavirus, holds a mobile phone during a trading session at the Pakistan Stock Exchange (PSX) in Karachi on March 16, 2020. PHOTO: AFP

KARACHI: Provincial authorities in Sindh and Khyber-Pakhtunkhwa on Monday confirmed 115 and 15 new cases of novel coronavirus respectively, pushing the total number of confirmed cases in Pakistan to 183.

This is the single largest increase in novel coronavirus cases in the country as of today.

“This exponential increase is largely due to the recent inflow of pilgrims brought in from Taftan border after a purported quarantine,” Adviser to Sindh CM on Information Murtaza Wahab said in a tweet.

Total number of ppl affected by corona virus in Sindh has reached 146. Out of this, 119 are Zaireen who are being kept in Sukkur, 26 are in Khi & 1 is in Hyd. This exponential increase is largely due to the recent inflow of ppl brought in from Taaftaan after a purported qurantine

Earlier, Sindh Health Minister Azra Fazal Pechuho said there are 76 confirmed cases in Sukkur (all patients arrive from Taftan border), 26 in Karachi and one in Hyderabad, she confirmed.

Murtaza Wahab, earlier in the day, had said another 11 people who have reached the province from Taftan have tested positive.

Another 11 have tested positive. These patients came to Sukkur from Taaftaan & were purportedly kept in quarantine at the border. So the total patients affected by corona virus has reached 88 now. All these patients are being kept in isolation.

However, confusion remains as there is no provincial focal person to give a tally of confirmed cases in Sindh. The number of total cases may be revised as facts become clearer.

“Just received news that 15 out of 19 individuals received in K-P from Taftan have tested positive for coronavirus. These are the first positive cases in K-P,” provincial health minister Taimur Khan Jhagra said in a tweet from his official handle.

“They are being well looked after in quarantine in an isolated facility in DI Khan. More details soon,” he added.

#CoronaVirusUpdates
Just received news that 15 of 19 individuals received in KP from Taftan have tested positive for Corona Virus. These are the first positive cases in KP.
They are being well looked after in quarantine in an isolated facility in DI Khan. More details soon.

By March 11, the number of quarantined pilgrims in Taftan rose to 4,000 – out of which 2,000 belonged to Sindh. The quarantined individuals were placed in a tent city set up by the Balochistan government for Pakistani nationals entering the country from Iran.

After the 14-day incubation period ended, around 300 pilgrims left for Sindh. They were then quarantined in Sukkur where the Sindh government ran tests on the pilgrims before allowing them to travel further.

On Sunday, 20 cases were confirmed by the authorities with Punjab reporting its first confirmed patient. Sindh confirmed 18 new cases while Islamabad reported one.

As of now, there are 103 confirmed cases in Sindh, 15 in K-P, 10 in Balochistan, three in Gilgit-Baltistan, four in Islamabad and one in Punjab.

Out of the 18 cases reported in Sindh on Saturday, 13 were of those quarantined in Sukkur. Three out of the remaining five had recently returned from the Kingdom of Saudi Arabia, one travelled from Balochistan and the fifth patient had no travel history.

On Friday, Prime Minister Imran Khan chaired a meeting of the National Security Committee (NSC) to cobble a unified approach to contain the outbreak.

The Pakistan Day parade on March 23 has also been cancelled.

In Khyber-Pakhtunkhwa, the education institutions have been closed till April 5 and suspended wedding activities around the province.