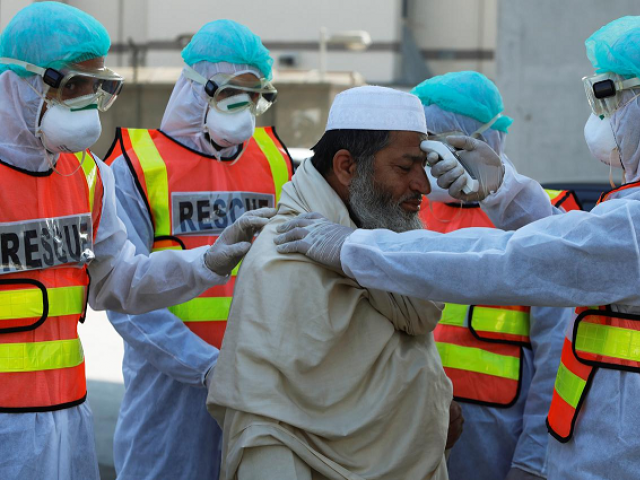 One patient returned from Saudi Arabia while the other’s father has travel history of Europe. PHOTO: AFP/FILE

KARACHI / ISLAMABAD: Two new cases of novel coronavirus have been confirmed in Balochistan on Saturday, bringing the total number of COVID-19 cases in the province to 10 and Pakistan to 33, the provincial government spokesperson Liaquat Shahwani said.

Earlier in the day, three more cases of novel coronavirus surfaced in the country, including Islamabad’s first and second locally transmitted case in Karachi.

A woman, who had recently arrived in the federal capital from the United States, was tested positive at Pakistan Institute of Medical Sciences (PIMS) today, the health facility’s spokesperson Dr Waseem Khawaja confirmed.

The patient is in critical condition and has been put on ventilator, he added.

With two fresh cases of COVID-19 in Sindh, the provincial tally has risen to 17.

One patient recently returned from Saudi Arabia while the other patient’s father has a travel history of the United Kingdom and transmitted the virus to his young child, Secretary Health Zahid Abbasi told Chief Minister Murad Ali Shah during the meeting of coronavirus task force.

The provincial health department has also taken the samples of second patient’s father.

Both cases are from Karachi.

Sindh now has two locally transmitted cases of COVID-19, a mysterious pneumonia-like disease caused by the coronavirus, the chief minister was informed.

“This is why I am continuously pursuing the matter to contain coronavirus,” he said and added that this was why he was banning all kinds of social, political and religious gatherings across Sindh.

Sindh Health Department has a new cases of Corona Virus in Karachi. The 20 year old patient has no travel history however the patients father returned from UK recently. The parents have been taken for testing. This brings the total number of cases to 17 in #Sindh. #SindhHealth

The first patient, a 38-year-old man from the Sindh capital, had arrived from Saudi Arabia a few days ago and was tested positive today.

Two individuals tested positive earlier have recovered while 15 are currently being treated at different health facilities.

As part of precationary measures, the Sindh government has closed all educational institutions till May 30.

The federal government, a day earlier, decided to adopt a number of precautionary measures to contain the spread of novel coronavirus including sealing the country’s western border with Iran and Afghanistan and cancelling the Pakistan Day parade scheduled for March 23.

The closure of the two borders will begin on March 16 “for an initial period of two weeks… in order to prevent the spread of COVID-19, in the best interest of all three brotherly countries”, the Ministry of Interior wrote to multiple inspector generals of Frontier Corps – a paramilitary force that operates in Balochistan and Khyber-Pakhtunkhwa – in a letter on Friday.

The decision was taken by the country’s top civil and military leadership at a meeting of the National Security Committee (NSC), presided over Prime Minister Imran Khan in Islamabad on Friday.

The huddle also decided to keep all educational institutions in the country closed till April 5 as a precautionary measure to contain the spread of coronavirus.

The World Health Organisation (WHO) has already declared the outbreak of COVID-19, a mysterious pneumonia-like disease caused by the coronavirus, a pandemic.

Originated in China late last year, the pandemic has so far claimed over 5,500 lives while hitting more than 130 countries around the world.

(With additional input from Mohammad Zafar in Quetta)

O/A Level exams not affected by school closure in Pakistan