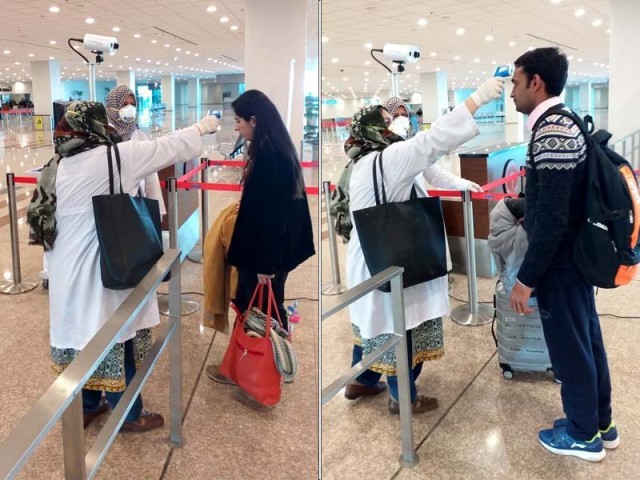 A notification, issued by the CAA director transport and economic regulatories, said the international flights being operated from Quetta, Sialkot, Multan, Faisalabad and Peshawar had been relocated to the airports in Karachi, Islamabad and Lahore.

The government on Friday went all out to prevent any outbreak of novel coronavirus in the country, closing schools and cinemas; sealing Iran and Afghan borders; limiting international flights; discouraging large gatherings and cancelling the joint military parade on March 23.

The NSC meeting, chaired by Prime Minister Imran Khan and attended by civilian and military leaders, decided to ensure less entry points to the country and allowed arrival and departure of international flights at only three airports in Karachi, Lahore and Islamabad.

Aviation Minister Ghulam Sarwar Khan confirmed on Friday night that the NSC meeting had decided to suspend international flight operation at five airports, while the Pakistan International Airlines (PIA) had announced rescheduling of its flights.

The CAA notification said the domestic flights would operate as usual at the five airports, which had been closed for international operations, adding that international flights would have the permission to land only at Karachi, Islamabad, and Lahore.

Arrangements are being made to transport the passengers to their destinations after landing at these three airports, said the notification. Health staff at these airports has also been directed to strengthen the screening of travellers, it added.

In pursuance of the NSC decision, the PIA also rescheduled its flight schedule. “The seven flights, which were being operated from Peshawar and Multan will now be operation from Islamabad and Lahore,” a PIA spokesman said on Saturday.

“The rescheduling of flights as per decision of the NSC is aimed at containing the spread of coronavirus in the country,” the PIA spokesperson said. “The PIA disinfects the planes after every flight as per international standards,” he added.

The Sialkot airport suspended all international flights on Saturday, a spokesman said.

Shakur Mirza, the public relations manager at the airport said that in accordance with the NSC decision, the airport will operate only domestic flights until March 31.

Ghulam Sarwar Khan, the aviation minister, said the decision to limit international flights would put pressure on Islamabad, Lahore and Karachi airports but “all efforts would be made to ensure the smooth operations” by mobilisation of resources and manpower from other airports”.

The minister said the coronavirus infection or COVID-19 has caused over $15 million losses to the state-run airline and aviation industry due to suspension of flight operations.

More than 142,000 coronavirus cases have been reported in at least 129 countries and territories, with almost 5,400 people losing their lives, according to the World Health Organisation. Many countries have closed borders and suspended land and air travel after the emergence of the virus.