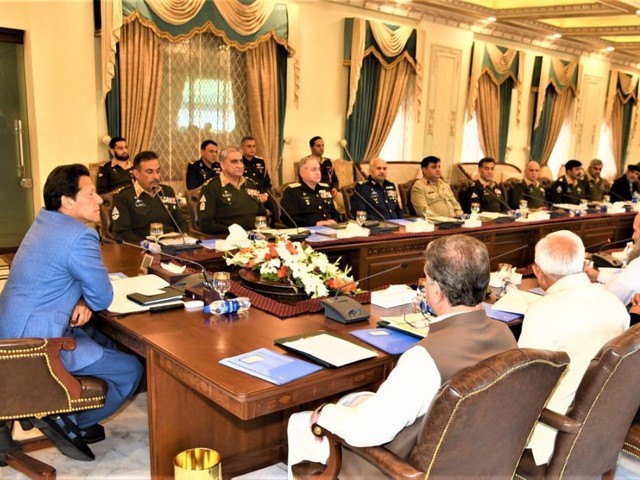 KARACHI: Pakistan’s top civil and military leadership has decided to adopt a number of precautionary measures to contain the spread of novel coronavirus including sealing the country’s western border with Iran and Afghanistan and cancelling the Pakistan Day parade scheduled for March 23.

The closure of the two borders will begin on March 16 “for an initial period of two weeks… in order to prevent the spread of COVID-19, in the best interest of all three brotherly countries”, the Ministry of Interior wrote to multiple inspector generals of Frontier Corps – a paramilitary force that operates in Balochistan and Khyber-Pakhtunkhwa – in a letter on Friday.

The decision was taken by the country’s top civil and military leadership at a meeting of the National Security Committee (NSC), presided over Prime Minister Imran Khan in Islamabad on Friday. 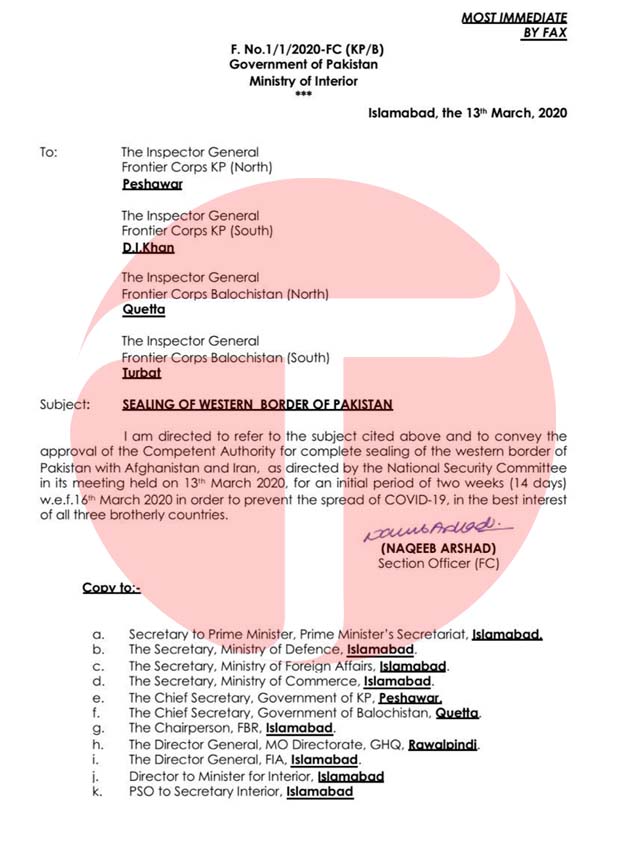 The huddle also decided to keep all educational institutions in the country closed till April 5 as a precautionary measure to contain the spread of coronavirus.

The World Health Organisation (WHO) has already declared the outbreak of COVID-19, a mysterious pneumonia-like disease caused by the coronavirus, a pandemic.

Originated in China late last year, the pandemic has so far claimed 5,118 lives while hitting more than 115 countries around the world.

The tally for confirmed coronavirus cases in Pakistan stands at 28 with 15 cases in Sindh, five in Gilgit-Baltistan and eight in Balochistan on Friday.

The decision to shut the educational institutions was announced by Federal Minister for Education Shafqat Mahmood through his official Twitter handle.

“This includes all schools and universities, public and private, vocational institutions and madaris,” he wrote.

The situation, he added, would be reviewed the Ministry of Education on March 27 to devise the future course of action.

The situation regarding closure of all educational institutions in the country would be reviewed by the Ministry of Education on 27th March and further decisions taken.

Provincial governments in Sindh, Balochistan and Khyber-Pakhtunkhwa (K-P) have already announced that they would keep all educational institutions closed to contain the spread of the contagious disease.

The K-P government, earlier in the day, said all schools, colleges and universities will remain closed for 15 days in the province.

A day earlier, the Sindh government had decided that educational institutions across the province would remain closed until May 31 and while also postponing examination for the grade 9 and 10, initially scheduled for March 16.

Similarly, the Balochistan government on Thursday announced the extension in the closure of educational institutions in the province till March 31.

PM Imran chaired today’s meeting, called to hammer out a strategy to deal with coronavirus as the army chief ordered his top commanders to gear up “in support of a national effort” to counter the pathogen.

“The government has convened the NSC meeting to review the situation arising out of coronavirus in the country. The government was already on alert to prevent the disease,” the prime minister had announced on Thursday while addressing a parliamentary party meeting of the ruling PTI.

The NSC meeting was announced as the country confirmed its 21st novel coronavirus case in Sindh while Punjab – the country’s most populous province – declared a “health emergency” to deal with the contagious disease.

According to Minister for Education Shafqat Mahmood, the NSC was to decide the kind of measures to be taken to deal with the situation including “refraining people from participating in public gathering”.

“The forum also discussed emerging situation with regards to the coronavirus and preventive measures taken at the military level. The COAS directed all concerned to gear up preparations in support of national effort to counter this pandemic in case of any eventuality,” said a statement issued by the military’s media wing.

Meanwhile, the federal government has established 35 isolation wards all over the country to cater to COVID-19 pandemic.

Province/Region wise No. of Designated Hospitals

Out of 28 confirmed COVID-19 cases in Pakistan, 15 are reported in Sindh, five in Gilgit-Baltistan and eight in Balochistan.

At least 110 have been tested in Punjab, 251 in Sindh, 30 in Khyber Pakhtunkhwa, 18 in Balochistan, nine in Azad Jammu and Kashmir and 32 in Galgit-Baltistan.

So far Punjab, K-P, AJK and federal territories have not reported any confirmed case of the novel coronavirus.