At least 400 booked for disrupting Aurat March in Islamabad

At least 400 booked for disrupting Aurat March in Islamabad 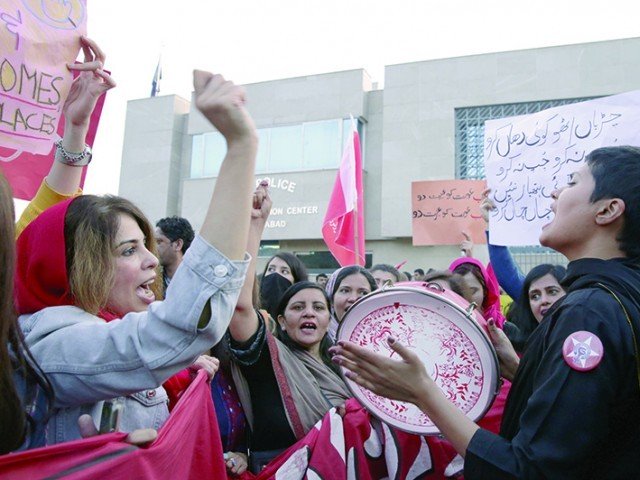 ISLAMABAD  : An FIR was registered against members of various religious parties on Monday for pelting stones and attempting to disrupt the Aurat Azadi March held in Islamabad a day earlier.

At least 400 people, including 11 religious scholars, were booked for violating Section 144. The case was registered at the Kohsar police station, in the court of magistrate City Circle Ghulam Mustafa Chandio.

The FIR states that the accused intervened in the operations of the state and misbehaved with police officials. It further observes that the protestors undermined the sentiments of the public by blocking the road, and caused unease to the women on a day meant to celebrate them.

A large number of women and men belonging to various political and human rights organisations had gathered outside the National Press Club on Sunday to mark the International Women’s Day.

Earlier in the day, members from the women’s wing of Minhajul Quran, the Jamaat-e-Islami (JI), women members of the Jamia Hafsa as well as Ahle-Sunnat Wal Jamaat held rallies outside the press club.

The Aurat March, organised by civil society leaders and the local chapter of the Women Democratic Front (WDF) – a sister organisation of the left-wing Awami Workers Party (AWP) – began their event later in the day.

Perceived as being ‘against’ Islamic values by religious organisations, the leaders of the Aurat March were interrupted as they began their speeches. A large number of workers of a religious group gathered on the parallel road and some individuals started shouting slogans against the marchers.

The tense situation grew violent when some men from the religious group started pelting stones, shoes and even sticks at members of the march.

Some members of the latter reciprocated this gesture in kind. This caused a mini-stampede and injuries to several participants of the Aurat March, including WDF deputy general secretary Ismat Shahjahan.

Windows of several parked vehicles were also shattered.  Sources said the clash occurred owing to the administration’s decision to allow both the groups to organise their rallies on the same location at the same time.

The only thing that kept the situation from worsening was the heavy cordon of police officials, who had formed a human chain and placed roadside barriers and a tent in between the two groups.

Despite the incident, organisers of the Aurat March decided to continue their programme on a parallel road; they marched up to D-Chowk.

Federal Human Rights Minister Shireen Mazari strongly condemn the violence against Aurat March participants. “Our religion teaches tolerance and sabr (patience). It does not allow throwing stones and sticks at unarmed people [whom] one disagrees with. Can disagree with them but violence is unacceptable,” she said in a tweet.

In pictures: Aurat March creates ripples in puddle of patriarchy