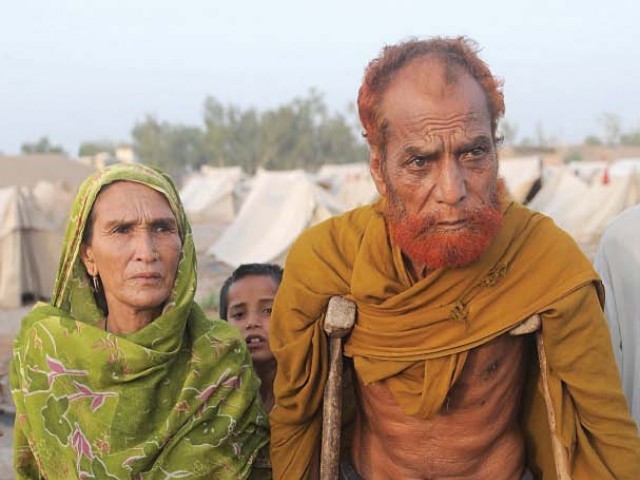 Bakhsh Ali Lashari has spent the last year living in a tent since floods devastated a third of Pakistan. His home is no longer under water, but death threats mean he’s never going back.

The monsoon-triggered floods — the worst in Pakistani history — affected up to 21 million people, killed another 1,750 and ran up losses of $10 billion; a year later a shattered economy has barely recovered.

Lashari’s was one of the worst hit areas, submerged in gushing waters that took months to recede.

But the disaster gave him a chance to break free from centuries of oppression. He is one of thousands who prefer life in rotting camps to returning to feudal estates where debts and marriages can end in death.

Lashari had a steady income as a labourer in Jacobabad, 375 kilometres north of Karachi, but said life became unbearable when an influential tribe took umbrage over one of their women marrying one of his relatives.

“The couple suddenly disappeared and the influential tribe threatened all of us with death,” said Lashari, while standing in a tent city on the fringes of Sukkur city.

“We couldn’t have moved away in normal circumstances. Then the floods came and we fled. It was a blessing in disguise. We are not going back now.”

His camp, lying under a bridge, was one of scores set up by foreign aid groups, the United Nations and local charities in August 2010.

But as waters have receded, many relief organisations abandoned the camps, dismantling education programmes and leaving behind uncomfortable, sagging tents where thousands have remained, either unable or unwilling to go home.

“They have nothing to lose if they don’t go home,” said Jaffer Memon, who edits a newspaper in Hyderabad and who worked as a volunteer during the floods.

“In fact they’ll get rid of feuds, burgeoning debts and lethal customs that force them to marry off minor daughters to elderly men to settle feuds, and kill their mothers, wives, sisters and daughters in the name of honour,” said Memon. Deedar Ali Jatoi, an ailing grandfather from the town of Garhi Khero, whose entire family has moved into tents, couldn’t agree more.

His community was locked in a feud with a rival tribe that killed dozens of loved ones on both sides.

“We’ve decided never to return. We don’t want to put our lives in danger again,” he told AFP in the same tent city on the edge of Sukkur, where women cook on makeshift wooden stoves and younger children play naked outside.

“We are poor peasants but as members of a tribe we’re bound to follow our chieftains and fight against rivals. But I don’t want to see any of my children killed in such feuds.”

“We have started earning now and can support our families. We’re not going anywhere. We want homes here, not there,” Jatoi said.

In Hyderabad, hundreds of flood survivors are camped out in the corridors of buildings of a new fruit market.

Most found the wages double what they were earning back home — up to $4.50 a day for menial jobs. Those who returned home have tales of woe.

“Our houses have been under water for months and are too dangerous to live in,” said Virsingh Patel, 34, a peasant from a Hindu village near Hyderabad.

“We were given just a few bricks to construct our homes. We have no money to purchase cement and extra bricks to make our homes safe,” said Patel.

Nadeem Ahmed, who was chairman of the National Disaster Management Authority during the floods, acknowledged the shortcomings, which he attributed to a lack of donation pledges — in sharp contrast with the response after the 2005 earthquake.

“Now where things have really gone wrong is the reconstruction,” he told reporters in Islamabad on Thursday.

“Out of those $10 billion required for reconstruction, I think hardly $1 billion or $1.5 billion have been committed so far. So there is a huge gap towards rebuilding or reconstruction.”

In Patel’s village, Radha Kolhi, 50, pointed to a picture of her dead husband hanging on a cracked wall and clothes and utensils lumped in a corner.

“Even if we can rebuild our house, we’ll never live without fear.

“The flood washed away the hurdles between us and the river, so now even a smaller flood can send us in camps,” she said.