Time for Afghans to step forward: new US ambassador

Time for Afghans to step forward: new US ambassador 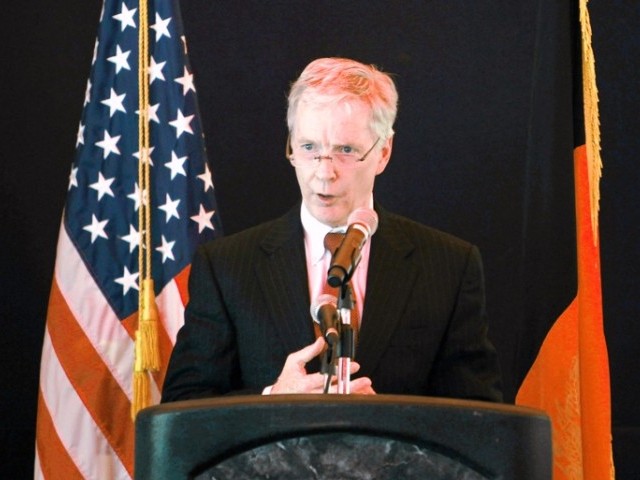 KABUL: The new United States ambassador to Afghanistan took office Monday and called on the war-wracked nation’s people to step up and take control as foreign troops start to wind down an almost 10-year war.

Coined “America’s Lawrence of Arabia” by former US President George Bush, Crocker enters the job at a critical juncture in the conflict, as a surge of international troops begin to leave amid deep war fatigue in Europe and the US.

Last week NATO-led forces handed over seven parts of the country to Afghan control, triggering a process that is due to end with the withdrawal of all 150,000 foreign combat troops by the end of 2014.

“We are at a time of transition in Afghanistan,” said Crocker, after taking his oath of office in a low-key ceremony held at the US Embassy in Kabul.

“It is a time for us to step back and for the Afghans to step forward, as they’re doing. There can be no clearer evidence than last week’s successful security transition,” the incoming ambassador said.

Crocker’s arrival comes one week after General John Allen took over from General David Petraeus as the US commander in charge of the international military effort.

But there is widespread doubt over the abilities of Afghan forces to take over from their foreign counterparts, with high levels of attrition and illiteracy and a lack of military equipment hampering their efforts.

NATO officials say the start of transition last week was just the beginning of a hand-over process that could last up to two years for each area.

“We must proceed carefully. There will be no rush for the exits,” added Crocker, warning against a repeat of the hasty US disengagement from Afghanistan in the 1990s that led to “civil war, the rise of the Taliban, sanctuary for Al-Qaeda and 9/11.”

“Our people are tired of military involvement and the expense of blood and treasure,” he acknowledged. “But my answer to that again is to remind those who say we should be done, of the incalculable long-term effects and cost of getting it wrong.”

Crocker has served as ambassador to Pakistan, and across the Middle East.

He served in Iraq during the military surge alongside General Allen, as well as Staffan de Mistura, the UN’s representative to Afghanistan, and is returning from retirement to head the embassy in Kabul.

Crocker recounted Monday his personal tale of watching from a nearby bridge as the World Trade Center fell on September 11, 2001 in the Al-Qaeda plane attacks that led to the war in Afghanistan.

He was also the diplomat who opened the American embassy in Kabul following the fall of the Taliban that was precipitated by the US-led invasion in late 2001.

“We will never forget, and 10 years on, I’m here to join all of you in doing our utmost to ensure that such an attack never happens again,” he told embassy and military staff.

Crocker also said that the US has no interest in permanent bases in Afghanistan, a contentious issue in secret talks believed to have been held in an attempt to find a political settlement to end the war.

“I repeat it here. We will stay as long as we need to and not one day more. We have no interest in using Afghanistan as a platform to project influence into neighbouring countries,” he said.

The new ambassador reiterated US support for Afghan national reconciliation and he acknowledged that the flow of international aid to the country would fall “in a non-disruptive way” as the conflict draws to its conclusion.