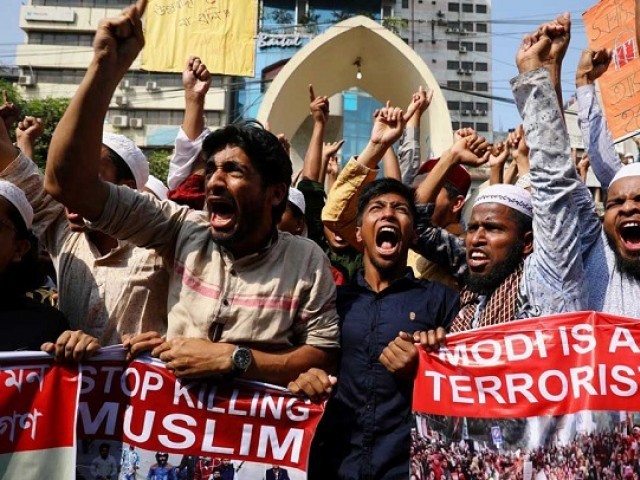 The British government has expressed concerns of over the anti-Muslim riots in the Indian capital as the issue of “sickening” violence was raised in the House of Commons, days after the lords termed India’s new citizenship laws “divisive”.

The government of Prime Minister Boris Johnson told MPs that the recent unrest in Delhi was “very concerning” but assured that it was watching the situation “closely”, adding that London has conveyed concerns to New Delhi in recent days.

Dozens of people died in the anti-Muslim clashes in India over the past week, with hundreds others injured, following the controversial Citizenship (Amendment) Act (CAA), while the international human rights watchdog stepped in to seek intervention of the Indian Supreme Court to stop discrimination against the minorities.

The violent clashes killed more than 75 people and injured over 350 across India. In New Delhi alone at least 47 people were killed and more than 100 wounded last week as groups of extremist Hindus, chanting nationalist slogans torched mosques and dozens of Muslim houses.

On Tuesday, the MPs from all the major parties, including the ruling Conservatives as well as the main opposition Labour besides the Liberal Democrats and the Scottish National Party (SNP), even Indian origin lawmakers, slammed India for the violence.

MP Khalid Mahmood raised an urgent question in the Commons, seeking a statement from the foreign secretary about the communal violence in Delhi. He warned that India’s citizenship laws would be followed by Muslims being “held in concentration camps” before being deported.

Foreign and Commonwealth Office (FCO) Minister for Asia, Nigel Adams, standing in for Foreign Secretary Dominic Raab, who was in Turkey, responded that the situation in Delhi was still tense, and that London had conveyed its concerns to Delhi.

Adams told the MPs that the events in Delhi were “very concerning” and the UK was monitoring the violence and developments around CAA “closely”. He added that the UK condemned targeting of people based on religion.

“Any allegation of human rights abuses is deeply disturbing and we have made it clear these must be investigated thoroughly, promptly and transparently,” Adams told the house. “We are in constant contact with the Indian government.”

SNP’s David Linden asked for assurances that the UK would not ignore human rights when it came to trade deals. “I can guarantee we will not pursue trade to the exclusion of human rights,” Adams said in his reply.

Yasmin Qureshi told Adams that in the past five years, Narendra Modi’s Hindu nationalist Bharatiya Janata Party (BJP) government had chosen a path of systematic discrimination. “We have concerns about the impact of the CAA,” Adams told the MP, according to UK-based Bolton News.

Labour’s Tanmanjeet Singh Dhesi and Preet Kaur Gill recalled the 1984 anti-Sikh violence in Delhi, and asked Adams what steps the UK government was taking to ensure that religious minorities in India could feel safe.

Some other MPs, including Yasmin Qureshi, mentioned recent developments in Assam and occupied Kashmir during the debate on ‘Recent violence in India’. SNP’s Alison Thewliss said that many of her constituents had raised concerns over the situation in occupied Kashmir.

“The British High Commission in New Delhi and our extensive diplomatic network of deputy high commissions across India are monitoring closely the recent violence in India and developments around the Citizenship (Amendment) Act 2019,” Adams said.

“The events in Delhi last week were very concerning, and the situation is still tense. The death of one protester is one too many. We urge restraint from all parties and trust that the Indian government will address the concerns of people of all religions in India.”

Addressing Thewliss, Adams said: “We regularly update our advice on Kashmir via the FCO website and we encourage people to take close notice of that. I am sure that my colleagues in the Home Office will have noted the honourable lady’s question and will make sure she gets a follow-up.”

Former Conservative transport minister Nus Ghani also expressed her concerns, saying that the brutality in Delhi seemed to have been meted out by those who should enforce the law. Her fellow Conservative MP Alicia Kearns asked the government to ramp up pressure on India on this issue.

Labour’s Mohammad Yasin, referred to reports in the British media and said that there was evidence that the police were “complicit in and, indeed, encouraging violence against Muslims”. Labour MP Zarah Sultana reminded the House that India had already stripped Kashmir of its autonomous status.

Senior Liberal Democrat MP Sir Alistair Carmichael said that the violence in India was conducted to marginalise the Muslims. “We all know that it is not [isolated act]; it comes on the heels of the Modi government’s actions in relation to Kashmir and the implementation in Assam of a national register.”

The debate lasted for nearly 40 minutes in which members expressed their concerns on the escalation of violence and the failure of Indian authorities to protect peaceful protestors from the attacks of ultra nationalist mobs.

The debate came after the House of Lords last week took up the India’s recent enactment of the Citizenship (Amendment) Act. Foreign Office Minister Elizabeth Sugg told the lords that the CAA “has clearly been divisive”.