ECC fails to agree on cheap electricity for exporters

ECC fails to agree on cheap electricity for exporters 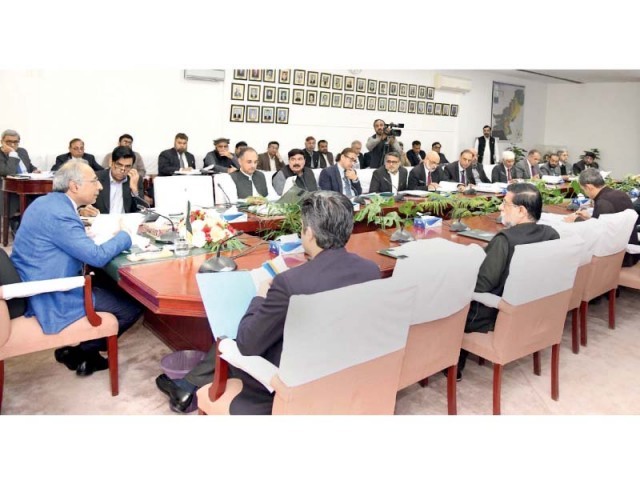 The remittances transferred into bank accounts will be exempt from withholding tax with effect from July 1, 2020. PHOTO: INP

ISLAMABAD: The federal government on Wednesday could not agree on the provision of subsidised electricity to textile exporters due to refusal by the Ministry of Finance and the Ministry of Power to foot the bill and also put off decision on 38% increase in electricity prices for Karachi consumers.

The Economic Coordination Committee (ECC) of the cabinet decided to take up the matter of providing cheap electricity to exporters in its next meeting.

Headed by Adviser to PM on Finance Dr Abdul Hafeez Shaikh, the ECC directed Minister for Economic Affairs Hammad Azhar and Minister for Power Omar Ayub to sort out the subsidy issue.

On February 27, Azhar announced that the government had reached an agreement with all stakeholders of the textile export sectors that addressed their concerns and also ensured that no additional financial burden would be borne by the Power and Finance Divisions in the current and next financial years.

However, Ayub stated in the ECC meeting that his ministry did not have funds to provide a subsidy of Rs28 billion to the exporters. Provision of subsidised electricity by collecting the difference from domestic and commercial consumers was also not possible in the current circumstances, he said.

The Ministry of Finance also refused to provide additional subsidy for the exporters.

In January last year, the Pakistan Tehreek-e-Insaf (PTI) government had agreed to charge 7.5 cents per unit from the export-oriented sectors but two months ago the power distribution companies started applying higher rates. The exporters threatened to go on strike against the hike in electricity cost, forcing the government to sit and negotiate.

The ECC also established a committee to review the decision of increasing power tariff for K-Electric consumers by Rs4.87 per unit or 38% on account of previous years’ adjustments. Some ECC members, including Railways Minister Sheikh Rashid Ahmad, opposed the decision.

The National Electric Power Regulatory Authority (Nepra) has approved an increase in tariffs for the period July 2016 to March 2019. The ECC constituted the committee to examine the issue in detail and come up within a week with a solution and road map for resolving the issue, according to the finance ministry. Total revenue impact of the tariff hike of Rs4.87 per unit is nearly Rs100 billion.

It was proposed during the meeting that instead of fully passing on the tariff determined by Nepra, the government should allow an increase of Rs2.87 per unit and absorb the remaining impact. There was also allocation in the budget for picking the price differential.

The ECC put off decision on providing subsidised electricity to agricultural tube wells in Balochistan.

The Ministry of Energy had sought a further extension in the supply of subsidised electricity till June 2020.

The ECC was briefed that nearly 30,000 agricultural consumers in Balochistan had been given subsidy since 2015 with 40% of the burden borne by the federal government and the remaining 60% by the Balochistan government.

However, the recovery of dues from farmers for the electricity consumed over and above the subsidy limit had been negligible and attempts to recover the arrears from defaulters had not been successful.

The ECC discussed the issue in detail and formed a committee. The federal government was contributing Rs9 billion annually to the subsidy on tube wells.

The ECC also approved a host of measures to encourage and facilitate overseas Pakistanis in sending remittances through official banking channels. The rebate of reimbursement of TT charges transactions between $100 and $200 will be increased from SAR 10 to SAR 20.

The amount of remittances transferred into bank accounts will be exempt from withholding tax with effect from July 1, 2020.

The National Remittance Loyalty Programme will be launched on September 1, 2020 in collaboration with major commercial banks and government agencies through which various incentives will be given to the remitters through mobile apps and cards. The ECC approved a technical supplementary grant of Rs9.6 billion for the current financial year to finance the remittance initiative.

The ECC approved technical supplementary grant of Rs5 billion in favour of the Higher Education Commission (HEC) for the current financial year 2019-20 with the instruction that called for a judicious and need-based distribution of funds among universities.

On a proposal of the Ministry of Defence, the ECC approved a technical supplementary grant of Rs34.528 million for the internal security duty allowance to Pakistan Air Force.