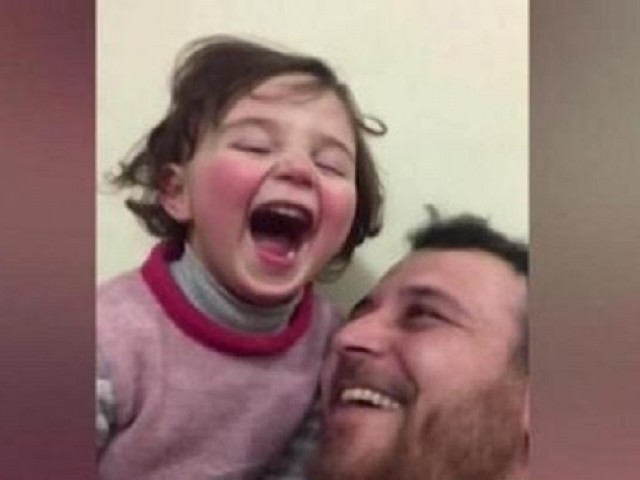 Salwa crosses border with her parents last week at the invitation of the Turkish state after the video goes viral. PHOTO: FILE

BEIRUT: A three-year-old girl taught to laugh off the sound of shelling in war-torn Syria has left with her family and started a new life in neighbouring Turkey, her father said on Wednesday.

Salwa crossed the border with her parents last week at the invitation of the Turkish state, her father Abdullah al-Mohammed said.

The little girl rose to fame last month after a video was circulated on social media of her and her father laughing at bombardment in embattled northwest Syria.

Her father said he was delighted Salwa would now be able to lead a quiet life in Turkey, away from the “disturbing sounds”.

“Her future here — after she starts kindergarten and then school — will definitely be better than if she had stayed somewhere at war,” the 32-year-old said.

In the video widely shared last month, he asks his only daughter if the whizzing sound they can hear outside is a plane or a mortar.
“A mortar,” the three-year-old answers.

“When it comes, we will laugh,” she says before — at the sound of a blast outside — breaking into a giggle that endeared her to millions.
Mohammed says he is happy he will no longer have to invent games to gloss over the horrors of Syria’s nine-year civil war.

“At least now I won’t have to lie to her,” he said by telephone from the border region of Hatay, where he is now looking for a job.

A Russia-backed military offensive on Syria’s last major opposition bastion of Idlib since December has forced almost a million people — more than 60 per cent of them children — out of their homes and shelters.

Many have sought refuge in areas along the Turkish border, but Turkey — already hosting 3.6 million Syrian refugees on its soil — has been reluctant to allow any more through.

Though he is one of the lucky ones, Salwa’s father said the departure was bitter-sweet.

“I’m happy we are in a safe place and that we managed to flee the bombardment, but I’m also annoyed and sad that I had to leave my country,” he said.

He and his family then found refuge in the town of Sarmada further north, where an AFP correspondent met them in February.

The most recent escalation of violence in Idlib has killed more than 470 civilians, the Syrian Observatory for Human Rights monitoring group says.

A new report this week found that fighting in the area has rendered large parts of the region uninhabitable.

The charity group Save the Children has warned that, even in the case of an immediate ceasefire, it would take “months if not years” to rebuild destroyed civilian infrastructure and create the trust for communities to return.