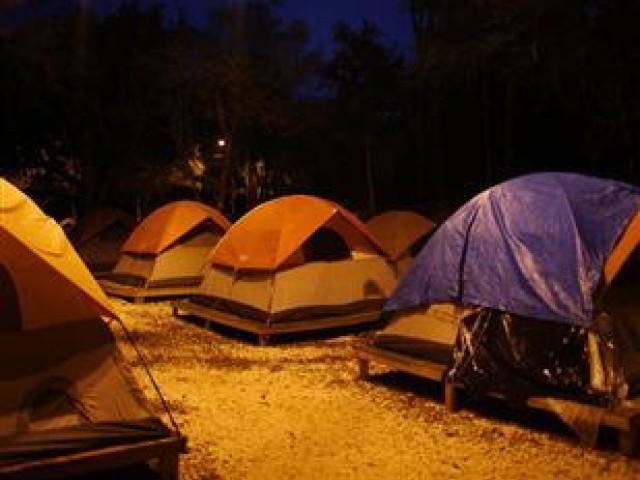 KARACHI: The Sindh government was informed on Monday that over 2,000 pilgrims who had travelled to Iran from across the province have been placed in quarantine for coronavirus in Taftan, Balochistan.

The quarantined individuals have been placed in a ‘tent city’ set up by the Balochistan government for Pakistani nationals entering the country from Iran.

“We are in contact with the Balochistan government,” said Sindh health department spokesperson Meeran Yousuf, adding that the families of those who have been placed in quarantine had also reached out to the provincial government.

Given the current situation, the health department has advised Sindh Chief Minister Syed Murad Ali Shah to send rations for the people of Sindh in the tent city. “We understand the burden on the Balochistan government and want to reduce it,” explained Yousuf.

A budget of Rs100 million for the efforts against coronavirus has been proposed to the CM and is expected to be approved in a Sindh cabinet meeting scheduled to be held today (Tuesday).

Meanwhile, the Sindh education department suspended the registration of 58 private educational institutions in the province, for violating the government’s orders to remain closed until March 13 amid fears about coronavirus.

Regional teams in all of Sindh’s divisions visited 422 private schools on Monday to check their compliance with the order, which had been issued a day earlier in order to allow the completion of the quarantine period by suspected coronavirus patients.

In Karachi, 40 schools had their registration suspended as they were found open despite the orders. The schools were located in areas including Lyari, Korangi, Nazimabad, Gulshan-e-Hadeed and Gulshan-e-Iqbal.

Sindh private schools registrar Rafia Mallah told The Express Tribune that inspection teams had visited 265 schools in different parts of the city and found 40 of them functioning as per their normal schedules.

“It was a violation of the law,” she explained, adding that 20 schools were shut down on the spot, while others were issued letters of suspension.

During a hearing on Monday evening, eight schools submitted affidavits and their suspensions were withdrawn, said Mallah. “We have instructed them to obey government orders in the future, or their registration will be cancelled,” she warned.

Speaking to The Express Tribune, another official of the education department explained that these schools had remained open on Monday in order to collect fees from their students. “It is the first week of the month, and a closure of two weeks would mean that they would not be able to collect fees for this time,” he maintained.

According to him, most of the reprimanded schools were located in suburbs and thickly populated areas. “The school owners believe that the education department only keeps a check on ‘elite’ institutions,” he added.

Three more inspection teams have been formed to visit areas including Gulshan-e-Hadeed, Korangi, Landhi, Baldia and Malir on Tuesday.

“I will visit schools tomorrow to ensure the writ of the government; stern action will be taken against those who violate orders,” stated Mallah. “Health is the priority and everyone should understand the situation the world is facing right now,” she asserted, adding that the decision to close educational institutions was for the safety of the children.

In Hyderabad, officials visited 20 schools and found two of them open. Both of them were closed on the instructions of the visiting officials. Meanwhile, in Mirpurkhas, the teams visited 10 schools, all of which were already closed. Thirty schools were checked in Shaheed Benazirabad division, of which three were open on Monday. In Sukkur, the registration of six schools was suspended while 30 schools were visited. In Larkana, all seven schools visited were closed, said the education department.

According to Yousuf, the health department spokesperson, a total of eight suspected patients were tested for coronavirus on Monday, but all of their reports were negative for the disease. “We do not have any new cases,” she added.

In a meeting with CM Shah, health department officials said that 12 samples were sent to the laboratories for testing on Sunday and Monday, out of which 11 were declared negative while results were still pending for one case.

It was also disclosed during the meeting that 2,301 pilgrims belonging to Sindh had returned to Pakistan from Iran, including 681 passengers via Karachi airport and 1,620 through the Taftan border in Balochistan. Health officials added that their details had been obtained and they were under vigilance.

Shah directed him to ask the Balochistan government to give a health clearance certificate to every person being released from quarantine in Taftan.

The CM was also told that hand-wash, sanitisers and essential food commodities had been provided to those families that were under quarantine, as well as medicines that had been arranged through hospitals and philanthropists.

It was further pointed out in the meeting that a number of educational institutions had reopened on Monday in defiance of the government’s orders, at which Shah directed the Karachi commissioner and city police chief to take action against them.

Thanking the involved officials for their untiring efforts, the CM said that the timely efforts of the Sindh government were producing positive results in the attempt to prevent the spread of the virus.