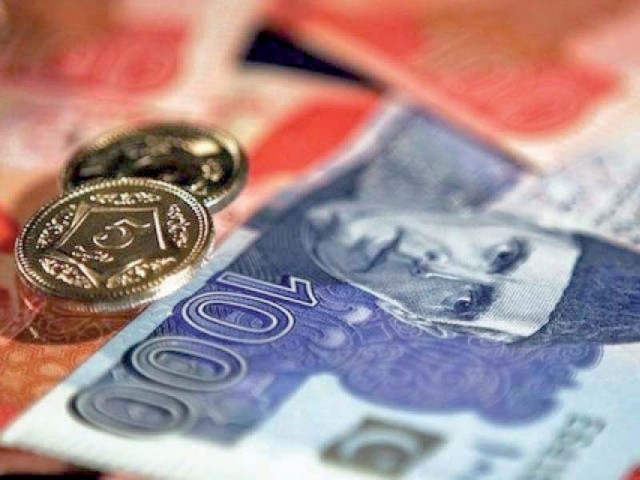 The last extended date for filing income tax returns ended on Friday and till the closing time, the FBR had received 2.45 million tax returns for tax year 2019, according to FBR officials. PHOTO: FILE

ISLAMABAD: The Federal Board of Revenue (FBR) has provisionally collected Rs2.72 trillion in taxes, missing its eight-month target by a record margin amid failure to increase the number of income tax return filers that has dropped by nearly 13% to only 2.45 million.

From July through February of the current fiscal year 2019-20, the FBR collected Rs2.72 trillion in taxes, according to provisional figures. The collection fell short by a record Rs490 billion when compared with the original target of Rs5.555 trillion.

The Rs2.72-trillion revenue collection was higher by 16.5% or Rs385 billion as compared to the same period of the previous fiscal year.

However, the growth rate was less than half the needed rate of 38%, which the FBR was required to achieve to hit the Rs5.5-trillion annual target. Last year, the government had collected Rs2.332 trillion in the same period.

The eight-month revenue target of Rs3.207 trillion was against the annual target of Rs5.5 trillion, which the IMF has agreed to revise downwards to Rs5.238 trillion. However, the federal cabinet has not yet revised the budget estimate for the fiscal year 2019-20.

The Ministry of Finance is expected to officially seek the cabinet’s approval for the revised revenue target in the Budget Strategy Paper 2020-21.

When compared with the IMF’s revised target, the eight-month collection fell short of the goal by Rs209 billion. But ambiguity remains about what actual target the IMF has now given to the FBR after both sides reached a staff-level agreement on Thursday.

The number of income tax returns has dropped by nearly 358,000 or 13% as compared to the last tax year.

Under the Income Tax Rules of 2002, the FBR publishes the new Active Taxpayers List on March 1 every year. The list is expected to be made public on Monday aimed at fulfilling the legal requirement.

The date of filing income tax returns would not be extended further, Dr Hamid Atiq Sarwar, the FBR spokesman, told The Express Tribune.

The statutory date for filing income tax returns is September 30 each year but the FBR has powers to extend the date.

The FBR has remained without a permanent head for the past one month after Shabbar Zaidi stopped attending the office. The government has given the charge of looking after the FBR affairs as chairperson to Nausheen Javed.

However, her status remains unclear as neither the government has decided to permanently appoint her nor has communicated her to continue at least till June 30.

Javed on Friday transferred Zubair Bilal, a grade-20 officer, who was serving as special assistant to the FBR chairman. Bilal has again been sent to Multan as director intelligence and investigation.

In Bilal’s place, Javed has brought in Zulfiqar Ali Memon, a grade-19 officer, as special assistant to the chairperson. Memon was earlier serving as the commissioner Large Taxpayers Unit, Karachi.

On the insistence of the IMF, the federal government had set the FBR’s tax collection target at Rs5.5 trillion or 12.4% of GDP. The IMF had set an unrealistic target of increasing collection by 45% from last year’s Rs3.829 trillion. It had then forced Pakistan to take unprecedented revenue measures of Rs735 billion.

Although the eight-month collection was 16.5% or Rs385-billion higher than the previous year, there were allegations that the FBR blocked taxpayers’ refunds to inflate the collection. The FBR denies these allegations.

The National Assembly Standing Committee on Finance has set up a special body to find out the truth about blocking taxpayers’ refunds and paying major refunds out of the turn. Headed by Dr Ramesh Kumar of the PTI, the sub-committee held its first meeting this week.

Kumar inquired from FBR Member Operations Seema Shakil whether the top six recipients received refunds due to the influence exercised by a top chartered accountancy firm.

FBR claims loss of Rs330b due to import compression

Shakil said all the top six recipients were paid refunds on account of promissory notes issued by the government. She did not mention whether the payments were made because of the role of a particular chartered accountancy firm.

In February, the FBR provisionally collected Rs310 billion, up 17.5%. But it was short of the monthly target by Rs107 billion, one of the highest shortfalls in any month in the current fiscal year.

The FBR was required to show a 58% increase in the collection over February last year, which was an impossible task and suggested how badly Pakistan negotiated the IMF deal.