SSP Samo fears death toll could go up as some of the injure­d are in critic­al condit­ion
By Z Ali
Published: February 28, 2020
Tweet Email 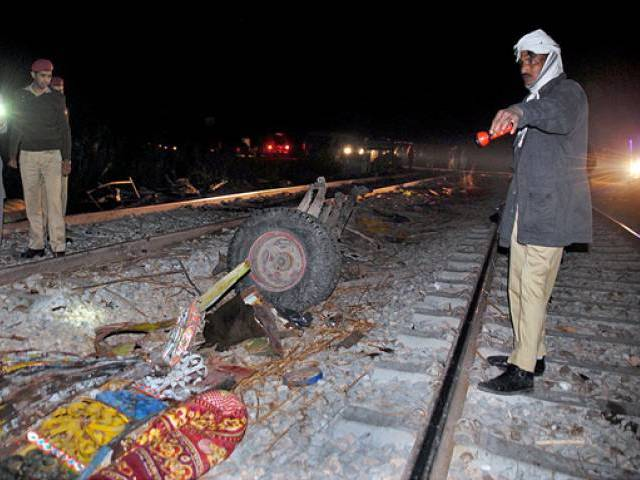 HYDERABAD: At least 20 people were killed and dozens injured when a train crashed into a passenger bus crossing the railroad tracks at an unmanned crossing in Sukkur district Friday night.

Senior Superintendent of Police (SSP) Irfan Samo feared the death toll might go up as most of the injured ferried to the Civil Hospital Sukkur and Taluka Hospital Rohri by police and Edhi rescuers are said to be in a critical condition.

The devastating impact of the collision at Jaro Maa railway crossing in Rohri split the passenger coach, which was en route from Karachi to Sargodha, into two.

The train, Pakistan Express, was travelling from Karachi to Multan. It dragged part of the wrecked coach several hundred meters before screeching to a halt on the tracks.

SSP Samo indirectly blamed the coach, saying the driver violated the route permit by taking a short cut to the National Highway.

“We saw several dead bodies and injured people when we alighted from the train to see what had happened,” a train passenger told journalists.

Another passenger added that he saw one man able to stand on his feet and two more survivors passing out.

Sukkur Commissioner Shafique Mahesar said 13 bodies were shifted to the Taluka Hospital. “The deceased, including women and children, have not been identified so far.”

Five injured died during the course of treatment at the Civil Hospital, while three succumbed to their injuries at the Taluka Hospital.

Load shedding created difficulties for the medics treating the injured as the Civil Hospital power generator was said to be out of order.

“I’ve time and again requested the railways authorities to man the crossings. Seven years ago, only a signboard was put up with a warning ‘Pass the crossing at your own risk’,” said Sindh Minister Awais Qadir Shah.

Talking to the media at the Civil Hospital, Dhamrah held Rashid responsible for repeated rail accidents during his tenure.