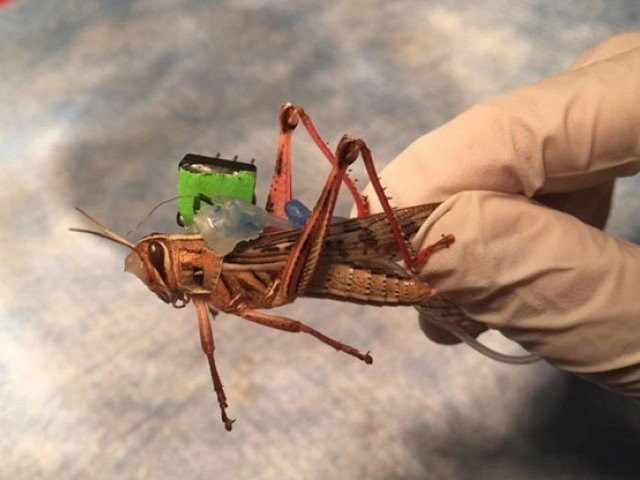 KARACHI  : Pakistan has once again been plagued with the problem of locusts, which inflicted substantial damage to farmlands thus threatening food security of the country and prompting the government to seek help from Chinese experts to tackle the issue.

Delegation members of the Chinese agricultural expert team, which is currently on a visit to Pakistan, stated that Beijing has the potential to combat the locust emergency and can help Pakistan by providing supply of pesticides, equipment and establishment of a monitoring plant.

In a media briefing held at a local hotel on Thursday, the panel lamented that massive swarms of locusts have plagued the country in recent months.

Zho Jinqua, an official at the Asian and African Affairs department at the Chinese Department of International Cooperation, said that China would initially provide Pakistan non-toxic pesticides to deal with the issue.

“We will also provide special vehicles to spray the pesticide,” he stated. “One vehicle can cover an area of 333 hectares in eight hours and we will provide 50 such vehicles for efficient elimination of the problem.”

In addition to this, he mentioned that his country would also supply plant protection drones. Detailing further, he added that one drone possesses the capacity to spray 26 hectares in eight hours and China would also provide 50 units of drones as well.

Apart from this, he informed the people at the event that Beijing would further send surveillance equipment for monitoring of locusts in future which is aimed at containing the problem.

Moreover, they assured to provide training on sustainable agriculture for people involved in the agriculture sector.

The delegation member announced that China would supply a low altitude agricultural aircraft as well which was highly efficient in combating pests such as locust.

The official highlighted that since the delegation’s arrival on Monday, it had met with officials from the Plant Protection Department, Agriculture Department and Food Ministry.

“We have also conducted a field survey,” he apprised. “On Wednesday, we travelled to Thar to inspect the situation and we will also travel to Punjab and other provinces to examine the situation there as well.”

He suggested that the government of Pakistan should enhance surveillance and formulate a timely strategy to combat the problem in the future.

Also speaking during the briefing, Chief Expert and Head of Delegation Wang Fengle declared that the team has three missions.

First one was to survey the area, provide recommendations and respond to the initial locust emergency.

The second mission, he added, was to formulate emergency assistance programme, while, the third mission was to explore a sustainable system and mechanism to control locusts.

“In the past, China has suffered locust emergency too and the country successfully managed to eradicate this menace,” he said. “We hope that China-Pakistan collaboration would bring in new technology to control locusts.”

During question and answer session, speakers disclosed that China would offer a package to Pakistan along with technical assistance, however, no specific amount of the package was decided until yet.