After Pakistan and Kuwait, Turkey to close Iran border over virus fears

After Pakistan and Kuwait, Turkey to close Iran border over virus fears 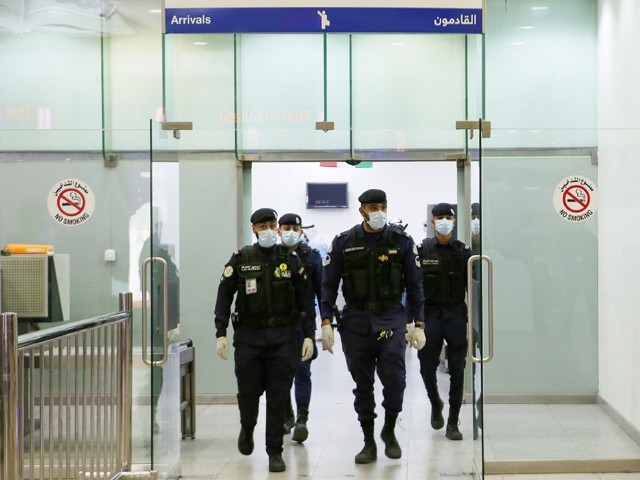 Kuwaiti policemen wearing protective masks wait at Sheikh Saad Airport in Kuwait City, on February 22, 2020, before transferring Kuwaitis arriving from Iran to a hospital to be tested for coronavirus.PHOTO: AFP

ISTANBUL: After Pakistan and Kuwait, Turkey has also announced that it would as a precautionary measure “temporarily” close its land border with neighbouring Iran as alarm grows over a spike in new coronavirus infections.

“We have decided to shut the land border temporarily after an increase in the number of cases in our neighbour Iran,” Health Minister Fahrettin Koca told reporters on Sunday. He said air traffic would be unilaterally halted from 2000 (1700 GMT).

Iran’s neighbours have started to take precautions against the spread of the virus.

Pakistan closed borders while the Kuwait Port Authority announced a ban on the entry of all ships from the Islamic republic.

Sources in the Balochistan interior ministry told The Express Tribune that the provincial government has banned Pakistani pilgrims from traveling to Iran. At least a hundred pilgrims were called back to Quetta from the Taftan border while special check posts have been established to monitor their movement.

Meanwhile, Iran has said that ‘enemies’ are using virus to sabotage ongoing general elections in the country.

Tehran has confirmed eight deaths from the novel coronavirus on Sunday, the highest toll of any country outside China, with the supreme leader, Ayatollah Ali Khamenei, accusing foreign media of trying to use the outbreak to sabotage the polls.

The final results of the parliamentary election are due later today, two days after it was held on the heels of the confirmation of novel coronavirus cases in the country.

The latest three deaths Iran reported on Sunday were among 15 new confirmed cases of the COVID-19 virus, bringing the overall number of infections to 43 and fatalities to eight — the highest death toll outside of China, the epicentre of the epidemic.

Four new infections surfaced in the capital Tehran, seven in the holy city of Qom, two in Gilan and one each in Markazi and Tonekabon, health ministry spokesman Kianoush Jahanpour said.

Authorities have ordered as a “preventive measure” the closure of schools, universities and other educational centres in 14 provinces across Iran from Sunday.

They include Tehran and Qom, where the first cases emerged, as well as Markazi, Gilan, Ardabil, Kermanshah, Qazvin, Zanjan, Mazandaran, Golestan, Hamedan, Alborz, Semnan and Kurdistan.

Art events, concerts and film shows have been banned for a week.

“We are on the frontlines, we need help,” the head of Qom’s medical sciences university, Mohammadreza Ghadir, said on state television.

“In every city, one hospital will be dedicated to treating coronavirus cases,” he said, adding that this number would be greater in bigger cities like the capital.

Mohsen Hashemi, head of Tehran’s municipal council, said, “If the number of infections increases in Tehran, the whole city will be quarantined.”

Posters were also being put up across the sprawling city on Sunday, asking people not to shake hands as part of a coronavirus prevention campaign.

Iran’s cyberpolice meanwhile warned that anyone putting “fake clips” online related to the virus would be punished.

The World Health Organisation has expressed concern over the speed at which COVID-19 has spread in Iran, as well as it being exported from the Islamic republic to other countries, including Lebanon.

Iran has yet to confirm the origin of the outbreak, but one official had speculated that it was brought in by Chinese workers.