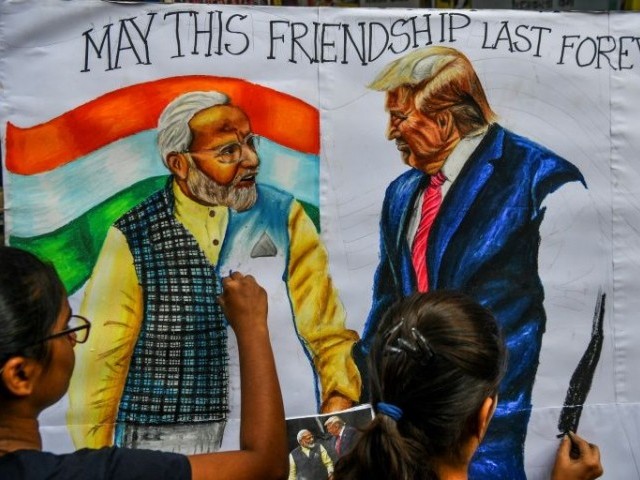 NEW DELHI: Trade ties between the United States and India have long been problematic but under “America First” President Donald Trump and “Make in India” Prime Minister Narendra Modi, they have worsened.

While eclipsed by his trade war with China, Trump’s tussle with India, and New Delhi’s prickly reaction, has made a major pact unlikely during the American president’s visit to the world’s fifth-largest economy from Monday.

“They’ve been hitting us very, very hard for many, many years,” Trump said of India ahead of the 36-hour trip to Ahmedabad, Agra and New Delhi accompanied by Commerce Secretary Wilbur Ross and others.

Here, AFP looks at the main issues of contention between the two countries on trade, which hit almost $145 billion in 2018, with the US deficit of $25 billion – much to Trump’s annoyance:

India has long had a penchant for protectionism. Its import tariffs are among the world’s highest. Under Modi, facing slowing growth, accelerating inflation and a widening budget deficit, this hasn’t changed.

Under pressure from farmers and fearing yet more cheap Chinese imports, Modi in November baulked at joining the Regional Comprehensive Economic Partnership (RCEP), a trade pact including Asia’s main economies and China.

In recent months, Modi’s government has hiked duties on US imports, including on $600 million worth of Californian almonds as well as apples, steel and chemicals coming into Asia’s third-largest economy.

In its recent budget, the right-wing government raised tariffs on items such as shoes, children’s tricycles and furniture, irking Washington which cancelled a visit by trade envoy Robert Lighthizer, reports said.

Plans to force foreign firms to store Indian consumers’ data locally have also irked US businesses, as have e-commerce regulations hitting firms like Amazon and Walmart.

Modi’s “Make in India” drive is aimed at getting foreign companies to manufacture in the South Asian country and so reduce imports – mirroring Trump’s “America First” mantra.

New Delhi’s actions “have made the protectionism concerns in India even greater”, a senior US official said ahead of Trump’s arrival.

However, many of India’s recent moves have been in response to actions by the Trump administration, starting with its 2018 decision to impose tariffs on steel and aluminium from India and other countries.

India is the world’s third-largest steelmaker, and its exports of steel products have tumbled 46 per cent according to the Peterson Institute for International Economics. Exporters of mechanical and electrical machinery and auto parts have also suffered.

Last year, Trump added to the pain by suspending India’s privileges under the decades-old US Generalized System of Preferences programme that had allowed it to ship $6 billion in goods duty-free.

The US wants to sell more medical devices like stents to India while US dairy farmers – a key voter base for Trump ahead of his re-election push in November – want greater access for their products.

India says it is worried American cows have been fed bovine extracts  – a no-no in a country where most Hindus believe the animals are sacred. Modi relies heavily on support from his farmers too.

United by mistrust of China, Trump’s visit will see deals in defence and other areas, including potentially the supply of six nuclear reactors, the fruit of a landmark atomic accord in 2008.

The visit will be big on optics, with Modi and Trump appearing at a rally at the world’s largest cricket stadium and the US president and First Lady Melania watching the sunset at the Taj Mahal.

But the main “deliverable” that both strongmen want is a big trade deal, and in its absence they might instead strike a smaller agreement, according to press reports.

This could include India lowering duties on large-engine Harley-Davidson motorcycles – long a bugbear of Trump – and farm products like alfalfa hay and pecans, according to Bloomberg News.

“We would not like to rush into a deal, as the issues involved are complicated and there are many decisions which actually could affect or impact the lives of millions of people on the ground,” cautioned an Indian government spokesperson.

Walls, mud packs and monkey removal for Trump in India