Many confus­ed users took to Twitte­r hoping to find the meanin­g of the notifi­cation­
By Tech Desk
Published: February 22, 2020
Tweet Email 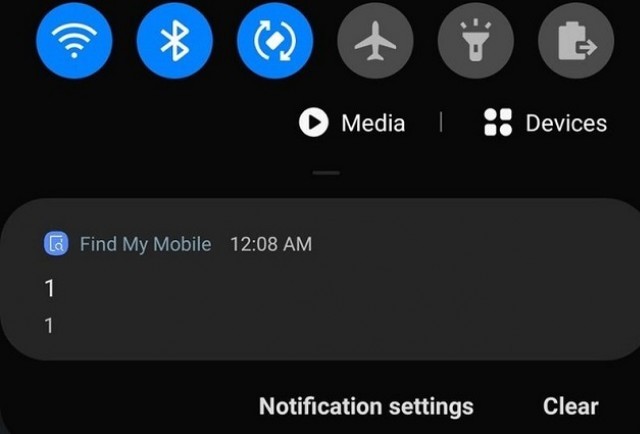 The notification appears to have come from Samsung’s Find My Mobile app, and simply says ‘1’.

Many confused users took to Twitter in hopes to find the hidden meaning behind the message.

@SamsungMobile So myself and many other Samsung users have all reported receiving a notification from the “Find My Mobile” app saying “1”… I clicked it and nothing happened. Check app info and it used 20% of my battery? Did all our phones just get hacked? pic.twitter.com/Qjg97N0h9Q

That Samsung “find my mobile” notification everyone just got could easily be from an episode of Black Mirror. The fact the app has nabbed over 10% of my battery doesn’t feel very comforting either. Security breach for sure

@SamsungMobile So myself and many other Samsung users have all reported receiving a notification from the “Find My Mobile” app saying “1”… Did all our phones just get hacked? pic.twitter.com/dqEjmNYaMh

I got the mystery “1” about 45 minutes ago. Immediately I thought someone was saying that I was #1. This is the Samsung Find My Mobile app? And it magically changed itself to allow notifications (which I have 100% turned off except text messages). No uninstall allowed.

Responding to the growing curiosity the company confirmed that the notification was sent unintentionally.

“Recently, a notification about “Find My Mobile 1” occurred on a limited number of Galaxy devices. This was sent unintentionally during an internal test and there is no effect on your device. We apologise for any inconvenience this may have caused our customers,” Samsung tweeted.

This won’t be the first time that a smartphone firm has pushed a cryptic message to its users, OnePLus accidentally pushed out a notification containing garbled text and Chinese characters.

The article originally published on MirrorUK.