Modi’s threat of using ‘mother of all nuclear bombs’ on Pakistan is reckless: Masood

Modi’s threat of using ‘mother of all nuclear bombs’ on Pakistan is reckless: Masood 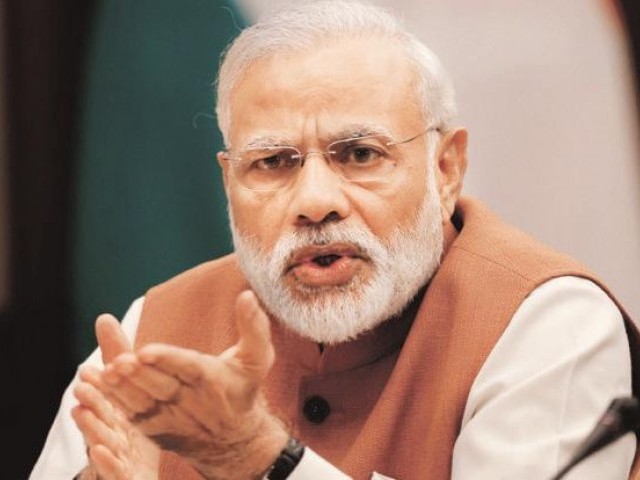 MUZAFFARABAD: Azad Jammu and Kashmir (AJK) President Sardar Masood Khan said on Wednesday that war is not an option and Narendra Modi’s threats of using ‘mother of all nuclear bombs’ to annihilate Pakistan is the most impulsive and reckless statement to be ever made by a person heading a nuclear nation.

The state president made these remarks while interacting with the participants of the International Workshop on Leadership and Security, organised by the National Defence University on Wednesday.

Business executives, parliamentarians, diplomats, government officials and representatives of the global civil society and media — both from abroad and Pakistan are attending the training.

Welcoming the participants to Azad Jammu and Kashmir, President Masood said despite the small size of the territory, AJK stores huge potential for growth and development.

“Government is focusing on three main goals — intensifying support to Kashmiris for attaining their right to self-determination; promoting good governance through accountability, rule of law and transparency; and sustainable economic development,” he said, adding that Azad Kashmir is trying to promote tourism, universal access to health, industry and education.

While comparing the state of freedom in AJK, where there are no concertina wires, no barricades, and no armed personnel roaming the streets and no instances of torture or rape being used as tools to terrorise the populace, with Indian Occupied Jammu and Kahsmir (IOJ&K), the president said that Indian troops have been deployed in the occupied territory, where Kashmiris have been imprisoned in their own homes as they face foreign occupation, alien domination and colonial rule.

Informing the audience that according to the ten stages of genocide defined by US-based Genocide Watch, Kashmir has now entered into stage 8, AJK president said: “Women are being molested and raped. Their bodies are being fetishised and objectified by the followers of the extremist Hindutva policy”.

While warning New Delhi from any engagement between India and Pakistan even at a small scale can lead to a nuclear war, the president said that the war will have far-reaching global consequences that include massive refugee outflows, major climatic and health impacts, food scarcity and ultimately a global economic recession.

Recalling the statement made by UN Secretary General Antonio Gutteres during his recent visit to Pakistan, the president said that the UN chief had demanded that the people of IOJ&K may also be allowed to enjoy the civil liberties and fundamental rights enjoyed by the people of AJK. “This statement proves that the situation across the Line of Control (LoC) remains highly concerning and precarious,” he added.

India, over the past seven decades, he said, has claimed IOJ&K as their territory but the alienation has only increased over the years.

“Ultimately, it is the people of this territory who will decide their political future. This is a right recognised by the UN Security Council in its resolutions on Kashmir in which they have clearly identified Kashmiris as the third party to the dispute,” Masood emphasised, adding that this is not a border dispute but rather a fight between humanity and inhumanity.

“World powers that remain tight-lipped have to take sides and cannot continue to sit on the fence,” he said. The AJK president thanked the international media for bringing forward a factual narrative on Kashmir and also the world parliaments and the US Congress for debating on the issue of Kashmir.

Responding to questions from the participant, the president said that US President Trump’s offers of mediation have not been heeded to by India as they falsely claim the territory an integral part of the union.

“As one of the most influential players in the international sphere, the US should help the oppressed people of IOJ&K by not siding with India when it comes to the brutalisation of Kashmiris, nor look at the Kashmir dispute through the prism of its economic interests with India.”

Commenting on the role of the diaspora community, the president said that Kashmiris residing in the UK, Europe and the US are actively reaching out to their lawmakers, representatives, community leaders and media. They, he added, have helped raise the profile of the Kashmir issue.

In his concluding remarks, President Masood said that the people of IOJ&K will attain freedom against all odds.

“People of IOJ&K are demanding a just resolution of the dispute in accordance with the UNSC resolutions and wish to ascertain their free political will,” he underscored, thanking the National Defence University for facilitating such a high-level delegation to visit AJK and see for themselves the fundamental rights and civil liberties being enjoyed by the people in the liberated territory.