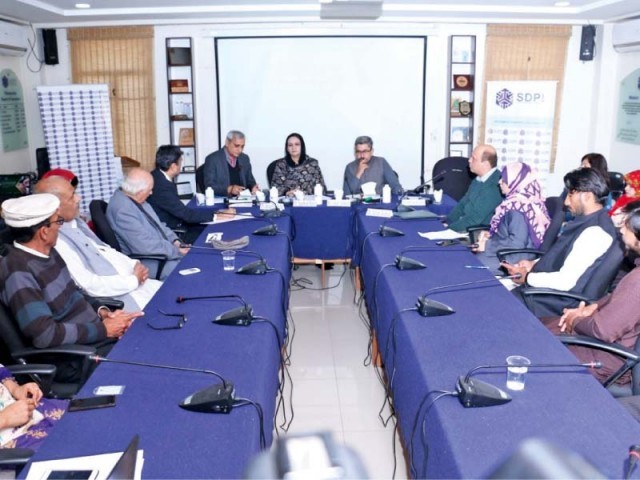 ISLAMABAD: With polio cases in the country speeding past the 100 mark for the first time in five years in the outgoing calendar year, health officials have suggested that one reason for the failures of the immunization drives over the past year has been the disruption in continuity of policies and greater politicisation of the drive apart from other external and internal challenges.

This was stated during a seminar on Monday polio titled “Pakistan’s fight against polio: Challenges and policy options”. The seminar had been organised by the Sustainable Development Policy Institute (SDPI) in Islamabad.

World Health Organisation (WHO) National Surveillance Coordinator Dr Shafiqueur Rehman said that over the past year, the change of leadership in the national polio programme at all levels, and even the change in some policies, had negatively impacted the programme.

The politicization of the polio programme over the past year diminished the ‘one-team approach’ towards eradicating polio which had been established over the years, Rehman lamented.

He stressed the need for reviving the National Emergency Centre, where the one-team approach can once again take root to deliver results.

“We need sustainability and continuity of policies for positive results,” he said while emphasising the need to implement the National Action Plan (NAP) 2020 against polio in letter and spirit.

Parliamentary Secretary of National Health Services Regulations and Coordination Dr Nausheen Hamid defended the incumbent government’s approach towards polio eradication in the country, stating that multiple steps have been taken, including the introduction of a comprehensive integrated approach under NAP 2020.

Explaining the comprehensive integrated strategy, Dr Hamid said that it includes the nutritional status and water, sanitation and hygiene (WASH) to fight polio. She further said that only administrating polio drops were not enough.

The parliamentary secretary further said that a major challenge with routine immunization was the fact that coverage in some provinces and areas was not very good. In this regard, she said that coverage in Balochistan was only around 24 per cent.

By comparison, it was over 60 per cent in places such as Punjab, Sindh and Khyber-Pakhtunkhwa (K-P).

The integrated approach, she hoped, will help counter this issue.

Other challenges include fake finger marking, refusal rates, negative propaganda — mainly on social media, and lack of ownership amongst communities, she said.

Dr Hamid, however, assured that there was the highest and strongest ownership of the programme at the prime minister, president, chief ministers and health minister levels which plays a significant, effective and positive role in fighting polio in the country.

Stressing on the need for national ownership, she said that the government has notified the National Strategic Advisory Board which includes members from all political parties and other stakeholders.

Commenting on the politicization of the immunization drive, she said that the Special Assistant to Prime Minister (SAPM) on Health Dr Zafar Mirza has taken tried to depoliticise the campaign by taking all political parties on board.

“To counter negative propaganda and educating the community on vaccine safety, the government has worked out a new communication and media strategy to raise awareness on the importance of polio vaccination by showing real-life stories of polio-affected people in media campaigns, which produces very positive results,” said Dr Hamid, adding that the government has also banned around 32 Facebook pages and accounts which were allegedly involved in spreading propaganda against the drive.

Moreover, she said that coordination with Afghanistan is also being strengthened and transmigration across the Afghanistan border now will be monitored and polio drops will be administered to every child crossing the border, she stressed.

Dr Israrurl Haq, the adviser on polio to SAPM Dr Mirza, highlighted the social-economic perspective of polio eradication and said that the perception and awareness around the dire consequences of poliovirus and diseases are very little amongst communities.