The attack is an appare­nt Saudi-led retali­ation after Iran-backed Houthi rebels claim to shot down one of its jets
By AFP
Published: February 16, 2020
Tweet Email 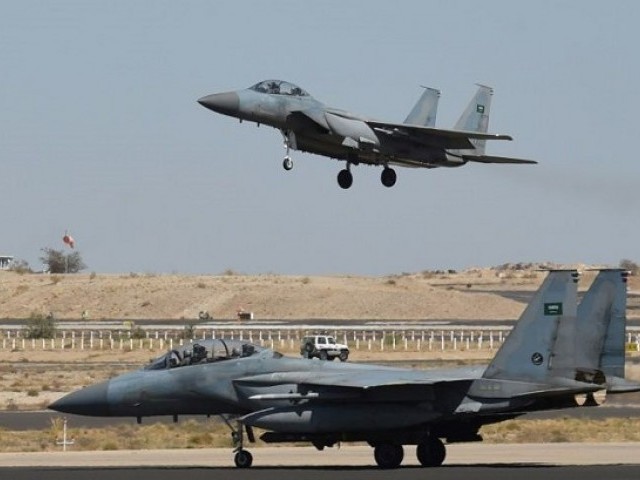 Saudi Arabia has been leading a controversial bombing campaign against rebel-held areas of Yemen since 2015. PHOTO: AFP

DUBAI: Thirty-one people were killed in air strikes on Yemen on Saturday, the United Nations said, the victims of an apparent Saudi-led retaliation after Iran-backed Houthi rebels claimed to have shot down one of its jets.

The Tornado aircraft came down on Friday in northern Al-Jawf province during an operation to support government forces, a rare shooting down that prompted operations in the area by a Saudi-led military coalition fighting the rebels.

The deadly violence follows an upsurge in fighting in northern Yemen between the warring parties that threatens to worsen the war-battered country’s humanitarian crisis.

“Preliminary field reports indicate that on 15 February as many as 31 civilians were killed and 12 others injured in strikes that hit Al-Hayjah area… in Al-Jawf governorate,” the office of the UN humanitarian coordinator for Yemen said in a statement.

Lise Grande, the UN coordinator, denounced the “terrible strikes”.
“Under international humanitarian law, parties which resort to force are obligated to protect civilians,” she said.

“Five years into this conflict and belligerents are still failing to uphold this responsibility. It’s shocking.”

The rebels reported multiple coalition air strikes in the area where the plane went down, adding that women and children were among the dead and wounded, according to rebel television station Al-Masirah.

The coalition conceded the “possibility of collateral damage” during a “search and rescue operation” at the site of the jet crash, which left the fate of its crew uncertain.

Without stating the cause of the crash, a coalition statement released by the official Saudi Press Agency said the crew, comprising two officers, ejected from the plane before it crashed but the rebels opened fire at them in “violation of the international humanitarian law”.

“The lives and well being of the crew is the responsibility of the terrorist Houthi militia,” the statement said, without specifying whether they had survived.

The Houthi rebels released footage of what they called the launch of their “advanced surface-to-air missile” and the moment it struck the jet in the night sky, sending it crashing down in a ball of flames.

“The downing of a Tornado in the sky above Al-Jawf is a major blow to the enemy and an indication of remarkable growth in Yemeni (rebel) air defence capabilities,” Houthi spokesperson Mohammed Abdelsalam tweeted.

The escalation follows fierce fighting around the Houthi-held capital Sanaa, with the rebels seen to be advancing on several fronts towards Al-Hazm, the regional capital of Al-Jawf.

The province of Al-Jawf has been mostly controlled by the Houthis, but its capital remains in the hands of the Saudi-backed government.

Iran’s Rouhani says regional crisis can be resolved through diplomacy

The downing of a coalition warplane marks a setback for a military alliance known for its air supremacy and signals the rebels’ increasingly potent military arsenal.

“At the start of the conflict the Houthis were a ragtag militia,” Fatima Abo Alasrar, a scholar at the Middle East Institute said.

“Today they have massively expanded their arsenal with the help of Iran and its proxy Hezbollah,” Lebanon’s powerful Shiite movement.
Huthi rebels now possess weapons bearing signs of Iranian origin, according to a UN report obtained by AFP earlier this month, in potential violation of a UN arms embargo.

Some of the new weapons, which the rebels obtained last year, “have technical characteristics similar to arms manufactured in the Islamic Republic of Iran,” said the report, compiled by a panel of UN experts tasked with monitoring the embargo.

The panel did not say whether the weapons were delivered to the Huthis directly by the Iranian government, which has repeatedly denied sending them arms.

The coalition intervened against the Houthis in 2015, in a conflict that has killed tens of thousands of people, most of them civilians, and sparked what the United Nations calls the world’s worst humanitarian crisis.

The coalition force has been widely criticised for the high civilian death toll from its bombing campaign, which has prompted some Western governments to cut arms deliveries to the countries taking part.

On Wednesday, the coalition said it would put on trial military personnel suspected of being behind deadly air strikes on Yemeni civilians.