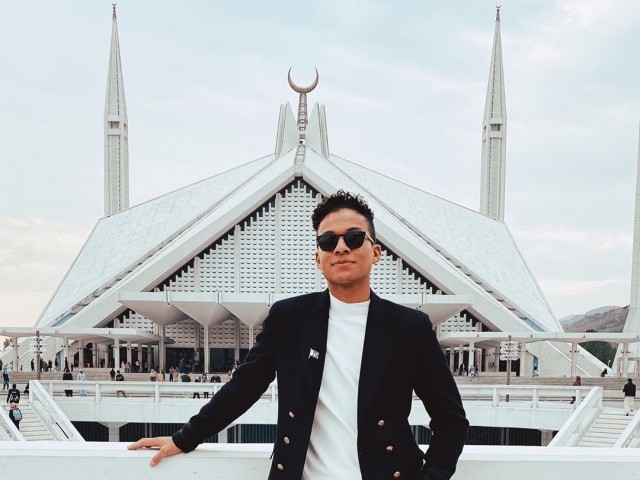 The King of Pop Michael Jackson’s nephew, Jaafar Jackson, is in Pakistan, as confirmed by his Instagram and Twitter posts.

The son of Michael’s brother Jermaine Jackson who was a part of the Jackson 5, Jaafar is seemingly touring Pakistan and is also open for queries – for bookings and shows.

Posing in front of the Pakistan Monument in the nation’s capital Islamabad, the 23-year-old wrote, “First day in Pakistan. Been looking forward to this trip and experiencing the different cities.”

He also has visits to some universities lined up, though he does not mention which ones in particular. “Looking forward to meeting the students at a few of the universities I’ll be visiting,” he said.

Jaafar is a singer himself with his debut single Got Me Singing boasting an impressive 5.29 million views on his Vevo channel.

Really enjoyed my time in Islamabad and now enjoying Lahore

Jaafar also posted a picture with the iconic Faisal Mosque in the background, captioning it, “Really enjoyed my time in Islamabad and now enjoying Lahore.”

Safe to say, he will be keeping his followers updated with his travels across Pakistan and we’re eagerly on the look-out for the rest of his itinerary.

Here’s hoping the young protege of the iconic Jackson clan enjoys his time in Pakistan and makes the best memories!

Justin Bieber admits to being ‘reckless’ in relationship with Selena Gomez