On Google Maps, Kashmir’s status is different for Pakistani and Indian users

On Google Maps, Kashmir’s status is different for Pakistani and Indian users 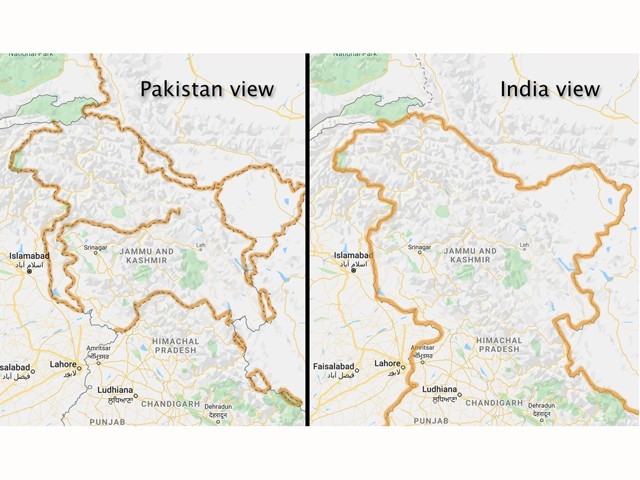 The disputed territory of Jammu and Kashmir has been the bone of contention between the nuclear armed rivals Pakistan and India for the last 70 years.

The long-standing dispute is not just a bilateral issue between the two South Asian neighbours but it is an internationally recognised conflict with several United Nations resolutions urging the Indian government to let the people of occupied region exercise their right to self-determination.

However, the web surfers, using Google maps in India, cannot be blamed for believing that the dispute has been settled with India having full control of the picturesque Himalayan valley, according to a report published in Washington Post.

#Google redraws the borders of Kashmir on maps depending on who’s looking. @ImranKhanPTI strong narrative on #Kashmir finally paying off, The #SiliconValley firm alter #GoogleMaps, now only Indian can see Kashmir as part of #India the rest will see it as disputed territory. pic.twitter.com/xdPmHf6gWx

The borders on Google’s online maps in India display disputed Kashmir as fully under Indian control but from Pakistan and elsewhere, users see the region’s snaking outlines as a dotted line, acknowledging the dispute.

Google’s corporate mission is “to organise the world’s information,” but it also bends it to its will. From Argentina to the United Kingdom to Iran, the world’s borders look different depending on where you’re viewing them from. That’s because Google — and other online mapmakers — simply change them.

“Our goal is always to provide the most comprehensive and accurate map possible based on ground truth,” Ethan Russell, director of product management for Google Maps, said in a statement sent through spokesperson Winnie King.

“We remain neutral on issues of disputed regions and borders, and make every effort to objectively display the dispute in our maps using a dashed gray border line. In countries where we have local versions of Google Maps, we follow local legislation when displaying names and borders.”

And while maps are meant to bring order to the world, the Silicon Valley firm’s decision-making on maps is often shrouded in secrecy, even to some of those who work to shape its digital atlases every day.

It is influenced not just by history and local laws, but also the shifting whims of diplomats, policymakers and its own executives, say people familiar with the matter, who asked not to be identified because they weren’t authorised to discuss internal processes.