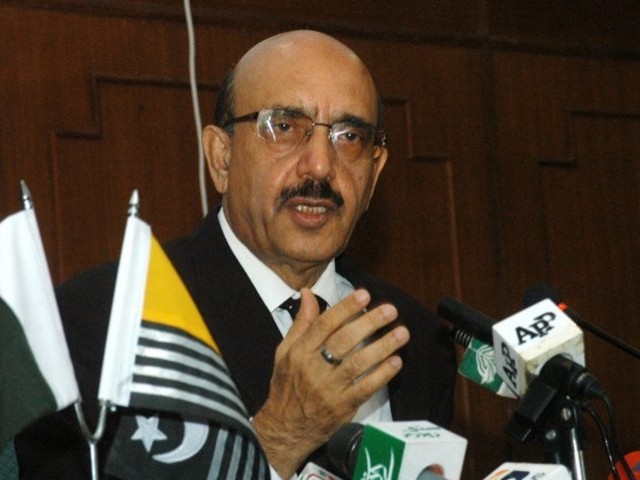 KUALA LUMPUR: President Azad Jammu and Kashmir Sardar Masood Khan on Saturday thanked Malaysian Prime Minister Dr Mahathir Muhammad for his principled and courageous stand on Indian-Occupied Kashmir (IOK) and his call for the implementation of the UN Security Council resolutions to give Kashmiris their democratic right to determine their own political future.

The AJK president also thanked the Malaysian Parliament for establishing a ‘Friends of Kashmir Group’.

“We hope that this would lead to the establishment of a Caucus on Kashmir in the Malaysian Parliament,” he said.

No solution to Kashmir issue sans consent of its people, says AJK president

President Masood Khan said that the people of the besieged valley want the realisation of their right to self-determination recognised and pledged to them by the UN Security Council.

“They do not want a confrontation or war or endless strife,” he said.

He told his interlocutors that Kashmiris had been subjected to inhumane violence for the past 72 years, including kidnapping massacring, blinding and raping.

Since August 5, 2019, the entire territory of IOK has been under a relentless occupation lockdown and communication blockade.

“The people and the land are both under punitive, imperialistic siege”, he said, adding that in this dark hour of Kashmir’s history, the leadership and people of Malaysia have stood by Kashmiris and had demanded an end to occupation of the territory and repression.

“I salute Malaysia for not yielding to immense Indian pressure to retract its position on Kashmir. The Malaysian example clearly shows that nations have to bear costs for upholding norms of justice and protection of human rights of people living under foreign occupation and alien domination”, he added.

The president also sought the guidance of the Malaysian leadership for resolving the Kashmir dispute through peaceful and diplomatic means while keeping the UNSC resolutions intact as the starting point of any negotiations on the issue.

Masood Khan further underscored that the people of Pakistan and IOK were keen to learn from the experience of Association of Southeast Asian Nations (ASEAN) which had invested time, energy and political will in confidence-building measures and conflict resolution mechanisms to amicably resolve the association’s internal problems and its issues with neighbouring countries.

The AJK President said that because of Malaysian Consultative Council for Islamic Organisation (MAPIM) leader Haji Mohd Azmi Abdul Hamid’s three visits to Azad Kashmir, in the recent past, new avenues are being explored to cement Malaysia- Kashmir ties.

During a visit to the MAPIM headquarters, he thanked Haji Mohd Azmi for bringing Malaysian and ASEAN parliamentarians and representatives of civil society organisations to Muzaffarabad.

“Elaborate plans had been made by the two sides to establish a Malaysia-Kashmir Cultural Centre in Muzaffarabad later this year,” he said. “Besides, MAPIM would be donating ambulances to the AJK Government as a goodwill gesture.”

He also thanked MAPIM for launching the Malaysian Kashmir Youth Movement under its banner. Suhail Qamaruddin is its president and State Minister Rafiq its Patron.

President Masood Khan said that AJK is keen to receive, facilitate and host Malaysian tourists in all parts of the liberated state which is also a “paradise on earth” because of its alpine beauty and stunning landscapes.

He further said that Azad Kashmir and Malaysia can collaborate in the areas of extraction of precious and semi-precious stones, halal food, SMEs and the trade sector. “The Malaysian telecommunications enterprises could also help in building telecom infrastructures in AJK.”

“Azad Kashmir is also keen to attract Malaysian investment in industrial and agricultural sectors and would promote exchanges of faculty and students of higher learning institutions,” AJK president said.

During his visit to Malaysia, President Masood Khan also addressed a gathering of over 200 students of the prestigious University of Kuala Lumpur which specialises in natural sciences and new technologies.

After explaining the plight of the Kashmiris living in IOK, the president said that the Malaysian youth can play an important role in creating awareness about ongoing genocide in IOJK, mobilize international opinion for putting an end to repression in IOK and help create an enabling environment for the restoration and exercise of the fundamental rights of the Kashmiris including their right to self-determination.

“We all belong to one global village, one humanity and one international community. Kashmiris should not be allowed to be persecuted and exterminated by Indian occupation forces with impunity. They should not be punished simply because they are Muslims. They should not become the victims of the neo-fascist Hindutva doctrine”, he said.

President Masood appealed to the Malaysian youth to communicate to the world forums, including the UN and influential parliaments, to stress the need for an end to the lockdown and repression in the Himalayan region, the reversal of the illegal steps taken on August 5 by India and stop land grab in the occupied territory.

The Malaysian youth, he said, has already created a platform for working with the global civil society, including the Indian civil society, to mould world opinion for the expeditious resolution of the Kashmir dispute.

President Masood Khan also addressed an interactive seminar at the MAPIM headquarters which was attended by representatives from Palestine, Syria, Turkey, Bangladesh, Indian community and Malaysian women organisations, among others.

All representatives expressed their resolve to accelerate their endeavours for saving Kashmiris from the scourge of genocide and make humanitarian interventions.

They emphasised that the Bharatiya Janata Party and the Rashtriya Swayamsevak Sangh should not be allowed to “copycat” and replicate the pattern of occupation and legalisation of illicit settlements in the West Bank.